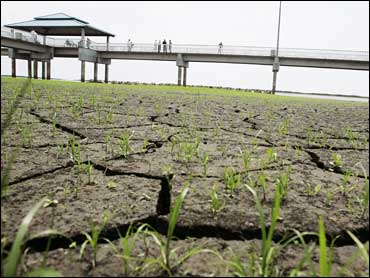 Neighbors are turning in neighbors for violating water restrictions, farmers are jittery about crops and churchgoers are praying for rain as Georgia suffers through one of its worst droughts in decades.

Sweltering conditions are expected to intensify. State climatologist David Stooksbury this week classified 74 of the state's 159 counties as being in "extreme" drought — more than double the assessment he delivered just a few weeks ago.

And he said he's doubtful conditions will improve any time soon, with little rain in the forecast.

"The Southeast, which desperately needs some rain, will stay dry at least for the next few days, but there is hope that a soaking rain will be developing over the region by the weekend," says CBS News meteorologist George Cullen.

The situation isn't much better in the Florida Everglades, where swampland looks more like Midwestern prairie.

"That used to be marshland, wetland. But it's not wet now," said a water manager there.

Florida water managers are struggling to fill the needs of rural growers and urban sprawl, reports CBS News correspondent Kelly Cobiella. Lake Okeechobee, the backup water supply for 5 million people in the southern part of the state, is shrinking a half an inch with every rainless day. The lake level is expected to hit an all-time low on Wednesday.

In Alabama many growers who switched from cotton to corn in the ethanol craze are now struggling to keep this more water-dependent crop alive.

"This is the most disastrous beginning we've had and the worst ending to a crop," a farmer told CBS News.

The land in Georgia is so dry that wildfires have been burning for more than a month, adds Cobiella. It'll be tough to find a Georgia peach this summer — some farmers already have lost 70 percent of that crop.

President Bush was going to Georgia Tuesday and was expected to be briefed on those wildfires.

The drought has forced Georgia officials to restrict when residents can water their lawns — limiting it to early mornings on alternating days. Some cities, including Atlanta, have gone a step further, ordering residents to water lawns, wash cars and restrict other outdoor use to one day a week.

In the Atlanta suburb of Roswell, police are giving residents the option to call 24 hours a day to report water-use violations.

"We are neither encouraging or not encouraging calls. It's up to them," said Julie Brechbill, a Roswell spokeswoman. "Our main concern is that our residents follow the restrictions because we're in a drought."

In Columbia County east of Augusta, officials get five to 10 calls a day from neighbors reporting neighbors for water violations. Sick of people ignoring the rules, the county is disconnecting the water for violators, with nearly 50 households disconnected in recent weeks.

"It's like any rule or law: If you don't enforce it, then no one abides by it," said Margaret Doss, the water quality manager in Columbia County, Georgia. "These are our customers and we hate to punish them. But on the other hand, the drought is significant and it has to be handled properly."

In rural areas, farmers worried about whether they should plant their crops are also facing a massive shortfall of hay, a key part of Georgia's $50 billion agriculture industry.

Bone-dry fields can't sustain enough grass to make hay. There's hardly a bale of hay to be found in Tifton and other Georgia towns.

"I don't know what I'm going to do," said Derrick Jones, a Tifton, Ga., farmer who this week could only scrape up enough bales of hay from his property to feed his 300 head of cattle for a day or two. "My only other option is to sell. That's not a good option, but it may be what we have to do."

Larry Crumley, a farmer in nearby Berrien County, is hoping to use a bin of unused rye seed to feed his 200 cattle. "It's down to that," he sighed. "We've bought all the hay we can buy, and it will last until Monday."

The lack of rain has given some residents a reason to ask for divine intervention. A group of churches in Moultrie, a south Georgia town, has started a weekly prayer service on Wednesdays to ask for rain.

"The community needed to come together and feel like you're doing something," said Rhonda Royals, a secretary who attended the first meeting Wednesday. "And the only thing you can do is pray — and pray hard."