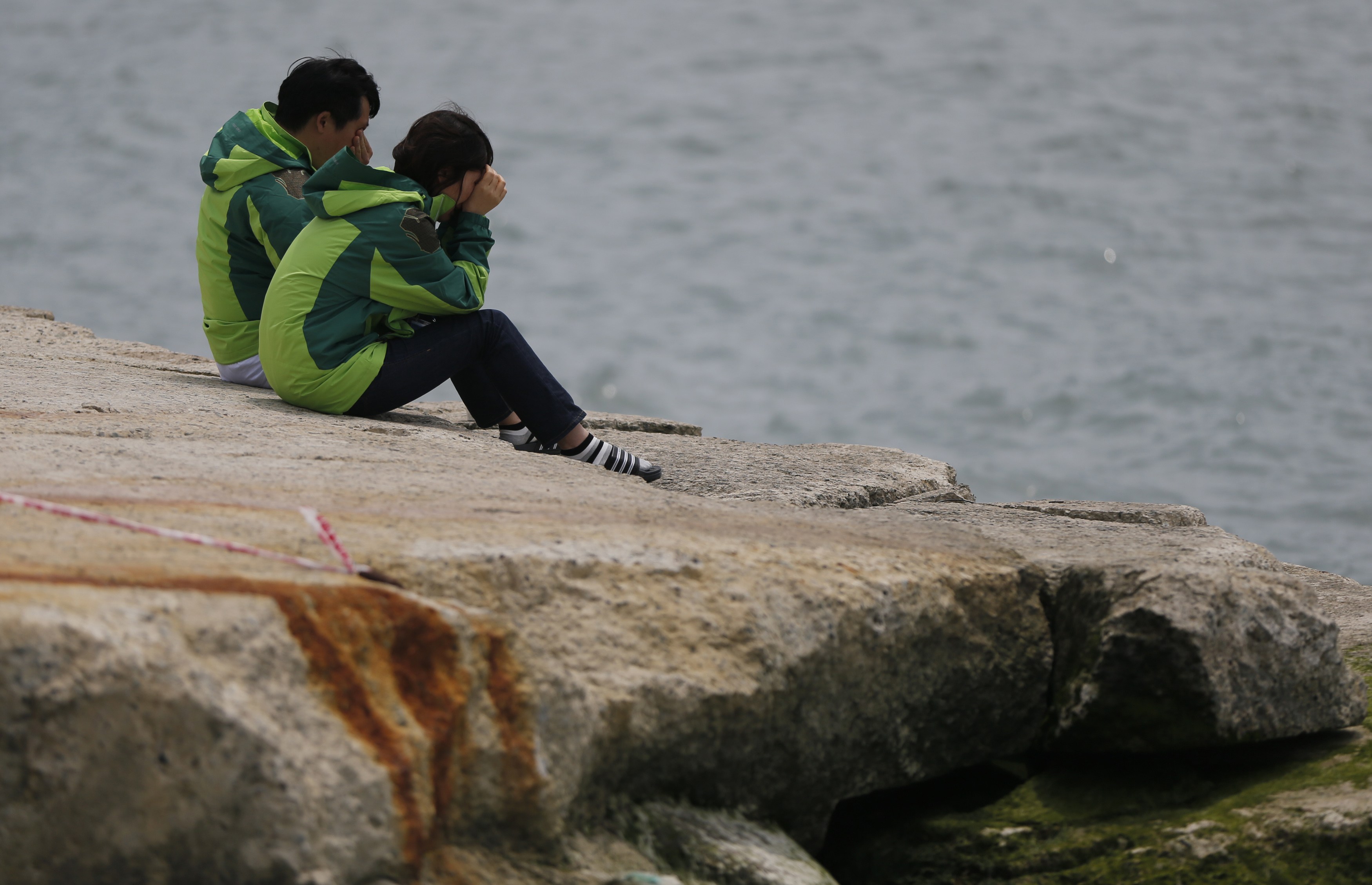 SEOUL, South Korea -- South Korean officials say their earlier conclusion that the ferry that sank last week, leaving more than 300 people dead or missing, had made a sharp turn shortly before the disaster was incorrect, and that the vessel made a less severe turn than initially reported.

Data transmitted by the Sewol's automatic identification system, an on-board transponder used for tracking, shows that the ship made a J-shaped turn before listing heavily and ultimately sinking.

A ministry of ocean and fisheries official had said Friday that the vessel had taken a sharp turn. But on Tuesday, a ministry official speaking on condition of anonymity saying he wasn't authorized to speak to media, said the AIS data received by a central station was incomplete because the ship's signal was weak.

More complete data, retrieved from a base station in Mokpo, includes about four minutes of tracking, and the ship spent most of that time making a roughly 180-degree turn.

It remains unclear why the ship turned around shortly before it sank. The third mate, who has been arrested, was steering at the time of the accident, in a challenging area where she had not steered before, and the captain said he was not on the bridge at the time.

Authorities have not identified the third mate, though a colleague identified her as Park Han-gyeol. Senior prosecutor Ahn Song-don said Monday the third mate has told investigators why she made the turn, but he would not reveal her answer, and more investigation is needed to determine whether the answer is accurate.

This, as the grim task of recovering bodies from the vessel continued, and the official death toll surpassed 100, hitting 108, with nearly 200 people still missing.

About 250 of the missing or dead are students from a single high school, in Ansan, near Seoul, who were on their way to the southern tourist island of Jeju.

Funerals were held in Ansan for more than 10 of the teens Tuesday, and education officials were building a temporary memorial that they expected to complete by Wednesday.

At the city education office, parents issued a letter pleading for more government help in the rescue, and condemning its response so far. The letter also criticized media for reporting false rumors, and for doggedly pursuing interviews with surviving children.

"The children say that when they look at the window, sudden fear of water seizes them. What the children need is utmost stability," said Jang Dong-won, father of a rescued female student.

Many families of victims, and South Koreans more broadly, have at times responded with fury.

The captain initially told passengers to stay in their rooms and waited more than half an hour to issue an evacuation order as the Sewol sank. By then, the ship had tilted so much it is believed that many passengers were trapped inside.

At a Cabinet briefing Monday, President Park Geun-hye said, "What the captain and part of the crew did is unfathomable from the viewpoint of common sense. Unforgivable, murderous behavior." The comments were posted online by the presidential Blue House.

The captain, Lee Joon-seok, and two crew members have been arrested on suspicion of negligence and abandoning people in need. Prosecutors detained six other crew members - four on Monday and two on Tuesday - but have yet to obtain arrest warrants for them.

The Reuters news agency reports that one of those detained and charged with negligence said the crew tried to launch lifeboats, but couldn't get close enough to them because of the tilt of the ship.

A transcript of ship-to-shore communications released Sunday revealed a ship that was crippled with indecision. A crew member asked repeatedly whether passengers would be rescued after abandoning ship even as the ferry tilted so sharply that it became impossible to escape.

Lee, 68, has said he waited to issue an evacuation order because the current was strong, the water was cold and passengers could have drifted away before help arrived. But maritime experts said he could have ordered passengers to the deck - where they would have had a greater chance of survival - without telling them to abandon ship.

Emergency task force spokesman Koh Myung-seok said bodies have mostly been found on the third and fourth floor of the ferries, where many passengers seemed to have gathered. Many students were also housed in cabins on the fourth floor, near the stern of the ship, Koh said.

One by one on Tuesday, coast guard officers were carrying newly arrived bodies covered in white sheets from a boat to a tent on the dock of the South Korean island of Jindo, the first step in identifying the sharply rising number of corpses from the ferry.

Dozens of police officers in neon green jackets formed a cordon around the dock as the bodies arrived.

Most of the bodies found have been recovered since the weekend, when divers, frustrated for days by strong currents, bad weather and poor visibility, were finally able to enter the ferry. But conditions remain challenging.

"I cannot see anything in front ... and the current underwater is too fast," said Choi Jin-ho, a professional diver who searched the ferry Monday. "Then breathing gets faster and panic comes."

If a body lacks identification, details such as height, hair length and clothing are posted on a white signboard for families waiting on Jindo island for news.

The bodies are then driven in ambulances to two tents: one for men and boys, the other for women and girls. Families listen quietly outside as an official briefs them, then line up and file in. Only relatives are allowed inside.

For a brief moment, there is silence. Then the anguished cries, the wailing, the howling. They have not known for nearly a week whether they should grieve or not, and now they sound like they're being torn apart.

She is with a woman who emerges from a tent crying and falls into a chair where relatives try to comfort her. One stands above her and cradles her head in her hands, stroking her face.

"Bring back my daughter!" the woman cries, calling out her child's name in agony. A man rushes over, lifts her on his back and carries her away.

Bodies are being identified visually, but family members have been providing DNA samples in case decomposition makes that impossible

This heartbreak still awaits many families of those still missing from the submerged ferry Sewol, or at least those whose relatives' bodies are ultimately recovered. Families who once dreamed of miraculous rescues now simply hope their loved ones' remains are recovered soon, before the ocean does much more damage.

"At first, I was just very sad, but now it's like an endless wait," said Woo Dong-suk, a construction worker and uncle of one of the students. "It's been too long already. The bodies must be decayed. The parents' only wish right now is to find the bodies before they