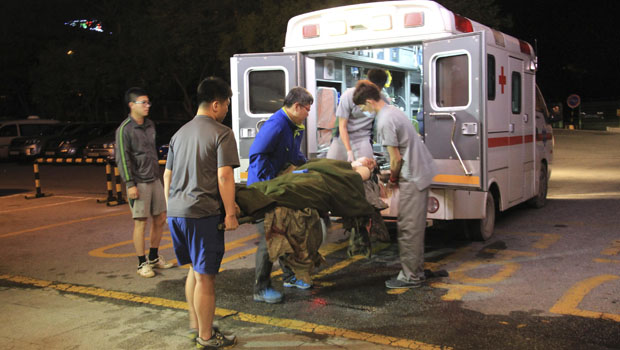 The army sergeant opened fire with a rifle at an outpost in Gangwon province, east of Seoul, an official at South Korea's Defense Ministry said. The official spoke on condition of anonymity, citing department rules. Local media reported that the soldier was at large with his weapon. But the military official declined to confirm whether the soldier was still at large.

Thousands of troops from the rival Koreas square off along the world's most heavily armed border.

There was no indication that North Korea was involved. But tensions between the rivals have been high recently, with North Korea staging a series of missile and artillery drills and threatening South Korea's leader. The Koreas have also traded fire along their disputed maritime border in the Yellow Sea. South Korea has repeatedly vowed to respond with strength if provoked by the North.

Shootings happen occasionally at the border.

In 2011, a 19-year-old marine corporal went on a shooting rampage at a Gwanghwa Island base, just south of the tense maritime border with North Korea. Military investigators later said that corporal was angry about being shunned and slighted and showed signs of mental illness before the shooting.

In 2005, a soldier tossed a hand grenade and opened fire at a front-line army unit in a rampage that killed eight colleagues and injured several others. Pfc. Kim Dong-min told investigators he was enraged at superiors who verbally abused him.

All able-bodied South Korean men must serve about two years in the military under a conscription system aimed at countering aggression from North Korea.

The Korean Peninsula is still technically in a state of war as the 1950-53 Korean War ended with an armistice, not a peace treaty. About 28,500 U.S. soldiers are stationed in South Korea as a deterrent against North Korean aggression.