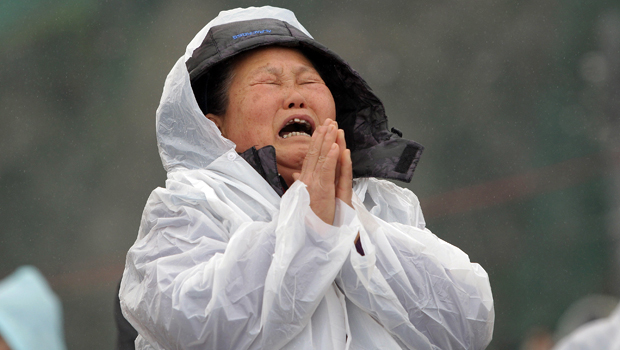 MOKPO, South Korea --After more than three days of frustration and failure, divers on Sunday finally found a way into a submerged ferry off South Korea's southern shore, discovering more than a dozen bodies inside the ship and pushing the confirmed death toll to 49, officials said Sunday.

More than 250 people are still missing, most of them high school students on a holiday trip, and anguished families are furious with the pace of rescue efforts. Divers had previously failed to enter the ferry, the Sewol, officials said, because of extremely strong currents and bad visibility due to foul weather. They have yet to find any survivors in the ship.

The captain of the ferry was arrested Saturday on suspicion of negligence and abandoning people in need. Two crew members also were taken into custody, including a rookie third mate who a prosecutor said was steering in challenging waters unfamiliar to her when the accident occurred.

Beginning late Saturday, when divers broke a window, and continuing into Sunday, multiple teams of divers have found various routes into the ferry, discovering bodies in different spots, coast guard official Koh Myung-seok said at a briefing. Thirteen bodies had been found in the ship, and three others were found floating outside, said coast guard official Kim Jin-cheol.

The bodies were brought ashore wrapped in white blankets.

Meanwhile, on an island near the submerged ferry, about 200 men in neon jackets blocked about 100 relatives of missing passengers who had been walking on a main road in an effort, they said, to travel to the presidential Blue House in Seoul to voice their complaints to the president.

"The government is the killer," they shouted as they pushed against a police barricade.

Lee Woon-geun, the father of a missing passenger, Lee Jung-in, 17, said that the relatives were desperate to retrieve bodies before they decompose beyond recognition.

"After four or five days the body starts to decay," he said. "When it's decayed, if you try to hold a hand it might fall off. I miss my son. I'm really afraid I might not get to find his body."

CBS News correspondent Seth Doane reports many families of the missing are camped out on the floor of a community gymnasium in the town of Jindo. It's as close as they can get to where the ferry sank.

Choi Young Kyung's aunt was on the boat. His mother spent Thursday night in a hospital because of all the stress. While CBS News was at the gym, some people were carried out on stretchers.

The wait is only broken up by bursts of anger and sometimes sobs.

The ferry's captain, Lee Joon-seok, 68, was arrested along with one of the Sewol's three helmsmen and the 25-year-old third mate, prosecutors said.

"I am sorry to the people of South Korea for causing a disturbance and I bow my head in apology to the families of the victims," Lee told reporters Saturday morning as he left the Mokpo Branch of Gwangju District Court to be jailed. But he defended his much-criticized decision to wait about 30 minutes before ordering an evacuation.

"At the time, the current was very strong, the temperature of the ocean water was cold, and I thought that if people left the ferry without (proper) judgment, if they were not wearing a life jacket, and even if they were, they would drift away and face many other difficulties," Lee said. "The rescue boats had not arrived yet, nor were there any civilian fishing ships or other boats nearby at that time."

The Sewol sank off South Korea's southern coast Wednesday with 476 people aboard, most of them students on holiday from a single high school. Most of those still missing are believed to be trapped inside the 6,852-ton vessel.

By the time the evacuation order was issued, the ship was listing at too steep an angle for many people to escape the tight hallways and stairs inside. Several survivors told The Associated Press that they never heard any evacuation order.

Senior prosecutor Yang Jung-jin told reporters that the third mate was steering the ship Wednesday morning as it passed through an area with lots of islands clustered close together and fast currents. Investigators said the accident came at a point where the ship had to make a turn, and prosecutor Park Jae-eok said investigators were looking at whether the third mate ordered a turn so sharp that it caused the vessel to list.

Yang said the third mate has six months of experience, and hadn't steered in the area before because another mate usually handles those duties. She took the wheel this time because heavy fog caused a departure delay, Yang said, adding that investigators do not know whether the ship was going faster than usual.

Helmsman Park Kyung-nam identified the third mate as Park Han-kyul. The helmsman who was arrested, 55-year-old Cho Joon-ki, spoke to reporters outside court and accepted some responsibility.

"There was a mistake on my part as well, but the steering had been turned much more than usual," Cho said.

Lee has four decades of experience at sea. He had been captaining ferries for 10 years by the time he was interviewed by the Jeju Today website in 2004, and said he had sailed on ocean freighters for 20 years before that.

But he was not the Sewol's main captain, and worked on the ship about 10 days a month, helmsman Oh Yong-seok said.

Lee was not on the bridge when the ship began to list. "I gave instructions on the route, then briefly went to the bedroom when it happened," he told reporters.

According to the court, Lee faces five charges, including negligence of duty and violation of maritime law, and the two other crew members each face three related charges.

Lee was required by law to be on the bridge helping his crew when the ferry passed through tough-to-navigate areas, said Yang, the senior prosecutor.

Yang said Lee also abandoned people in need of help and rescue, saying, "The captain escaped before the passengers." Video aired by Yonhap news agency showed Lee among the first people to reach the shore by rescue boat.

Yang said the two crew members arrested failed to reduce speed near the islands and failed to carry out necessary measures to save lives.

It's not clear why the two crew members made the sharp turn, Yang said. He said prosecutors would continue to look into whether something other than the turn could have made the ferry sink, but he added that there were no strong waves that could have knocked down the ferry at the time.

Prosecutors will have 10 days to decide whether to indict the captain and crew, but can request a 10-day extension from the court.

The Sewol had left the northwestern port of Incheon on Tuesday on an overnight journey to the holiday island of Jeju in the south with 323 students from Danwon High School in Ansan among its passengers. It capsized within hours of the crew making a distress call to the shore a little before 9 a.m. Wednesday.

A transcript of a ship-to-shore radio exchange shows that an official at the Jeju Vessel Traffic Services Center recommended evacuation just five minutes after the Sewol's distress call. But helmsman Oh told the AP that it took 30 minutes for the captain to give the evacuation order as the boat listed.

With only 174 known survivors and the chances of survival increasingly slim, it is shaping up to be one of South Korea's worst disasters, made all the more heartbreaking by the likely loss of so many young people, aged 16 or 17. The country's last major ferry disaster was in 1993, when 292 people were killed.

The last bit of the ferry that had been above water - the dark blue keel - disappeared below the surface Friday night. Navy divers attached underwater air bags to the ferry to prevent it from sinking deeper, the Defense Ministry said.

Three vessels with cranes arrived at the accident site to prepare to salvage the ferry, but they will not hoist the ship before getting approval from family members of those still believed inside because the lifting could endanger any survivors, said a coast guard officer, speaking on condition of anonymity, citing department rules.