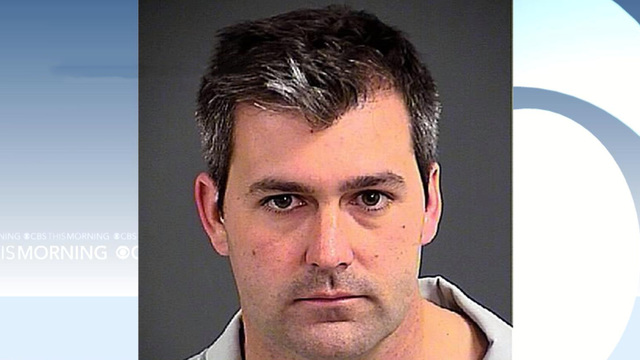 NORTH CHARLESTON, S.C. -- A white South Carolina police officer who claimed he killed an unarmed black man in self-defense has been fired, the city's mayor announced Wednesday, a day after the release of a video showing the officer firing eight shots at the fleeing man's back.

The mayor also announced that he had ordered body cameras to be worn by every single officer on the force in North Charleston.

Protests began within hours of the murder charge against Michael Thomas Slager.

"I have watched the video. And I was sickened by what I saw. And I have not watched it since," Police Chief Eddie Driggers said. He was interrupted by chants of "no justice, no peace" and other shouted questions that he and the mayor said they could not answer.

The town will continue to pay for Slager's health insurance because his wife is eight months pregnant, said Mayor Keith Summey, who called the incident a tragedy for two families.

About 75 people gathered outside City Hall, led by Black Lives Matter, a group formed after the fatal shooting of another black man in Ferguson, Missouri.

"Eight shots in the back!" local organizer Muhiydin D'Baha shouted through a bullhorn. The crowd yelled "In the back!" in response.

The video recorded by an unidentified bystander shows North Charleston Patrolman Michael Thomas Slager dropping his Taser, pulling out his Glock pistol and firing at Walter Lamer Scott from a distance as he runs away. The 50-year-old man falls after the eighth shot.

The dead man's brother, Anthony Scott, told CBS News that he thought "my brother was gunned down like an animal."

"It was just unbelievable to me to see that," Scott said.

"My nephew who arrived on the scene first, he said, 'He's gone,'" Scott said. "And when he said he's gone I'm like, 'That absolutely can't be true, that he's gone from a traffic stop.' I said, 'That can't be true.'"

His father, Walter Scott Sr., said Wednesday that the officer "looked like he was trying to kill a deer running through the woods." He also told NBC's "Today" show that his son may have tried to flee because he owed child support and did not want to go back to jail.

The video is "the most horrible thing I've ever seen," said Judy Scott, the slain man's mother, on ABC's "Good Morning America."

"I almost couldn't look at it to see my son running defenselessly, being shot. It just tore my heart to pieces," she said.

The bystander is assisting investigators after providing the video to Scott's family and lawyers.

Deflecting many of the questions from a hostile audience at a news conference, Summey said Wednesday that state investigators have taken over the case.

Earnest said he hadn't discussed the shooting with President Obama but wouldn't be surprised if Mr. Obama had seen the video.

Earnest also discussed the impact the video evidence appears to have had on the investigation.

"I think even the investigators themselves have acknowledged that when this video evidence was presented, that it changed the way that they were looking at this case," Earnest said.

Police initially released a statement that promised a full investigation but relied largely on the officer's description of the confrontation, which began with a traffic stop Saturday as Slager pulled Scott over for a faulty brake light.

Slager's then-attorney, David Aylor, released another statement Monday saying the officer felt threatened and fired because Scott was trying to grab his Taser.

Aylor dropped Slager as a client after the video surfaced, and the officer, a five-year veteran with the North Charleston police, appeared without a lawyer at his first court hearing Tuesday. He was denied bond and could face 30 years to life in prison if convicted of murder.

The shooting comes amid a plunge in trust between law enforcement and minorities after the officer-involved killings of Michael Brown in Ferguson, Missouri, and Eric Garner on Staten Island, New York. Nationwide protests intensified after grand juries declined to indict the officers in both cases.

"We have to take a stand on stuff like this ... we can't just shake our heads at our computer screens," said Lance Braye, 23, who helped organize Wednesday's demonstration.

Scott's family and their attorney, L. Chris Stewart, appealed to keep the protests peaceful, saying the swift murder charge shows that the justice system is working so far in this case.

The video, shot over a chain link fence and through some trees, begins after Scott has left his car. Slager follows him, reaching at the man with an object that appears to be a Taser stun gun. As Scott pulls away, the object falls to the ground, and Slager pulls out his handgun as Scott runs away. There is no indication that Scott was ordered to halt or surrender.

The final shot sends Scott falling face-down about 30 feet away. Slager then slowly walks toward him and orders Scott to put his hands behind his back, but the man doesn't move, so he pulls Scott's arms back and cuffs his hands. The officer then walks briskly back to where he fired the shots, speaking into his radio. He picks up the same object that fell to the ground before and returns to Scott's prone body, dropping the object near Scott's feet as another officer enters the scene.

Scott had four children, was engaged and had been honorably discharged from the U.S. Coast Guard. There were no violent offenses on his record, Stewart said.

He also speculated that Scott may have tried to run because he owed child support, which can lead to jail time in South Carolina until it is paid.

The FBI and the Justice Department's Civil Rights Division are investigating as well. Proving that an officer willfully deprived an individual of his or her civil rights has historically been a tall burden for federal prosecutors, particularly when an officer uses force during a rapidly unfolding physical confrontation in which split-second decisions are made.

The Justice Department spent months investigating the Ferguson shooting before declining to prosecute officer Darren Wilson in that case. But it's easier to make cases against officers who use force as an act of retribution or who can make no reasonable claim that their lives were in jeopardy when they took action.

North Charleston is South Carolina's third-largest city, and its population is about half black. Its economy slumped after the Charleston Naval Base on the city's waterfront closed in the mid-1990s, but the city has bounced back with a huge investment by Boeing, which now employs about 7,500 people in the state and builds its 787 aircraft in the city.

Braye accused North Charleston police of habitually harassing blacks for minor offenses. He hopes the video will help people understand that some officers will lie to save themselves when they do wrong.

"This needs to be the last case," Braye said. "All you have to do is look at the story that was told before the video came out."