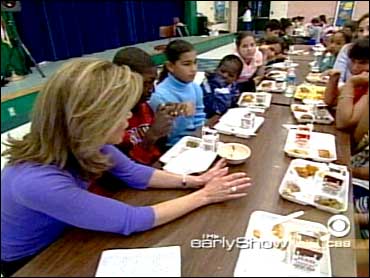 We've all heard the numbers: Fifteen percent of kids today are severely overweight or obese. So, in one Florida school district, educators have joined forces with the "South Beach Diet" guru to put almost every kid on a tough new meal plan. The Early Show correspondent Tracy Smith has the story.

At Mill Creek Elementary School in Kissimmee, Fla., lunch is a lesson in itself.

A new menu has students slimming down, "South Beach Diet"-style.

Principal Holly Willis says, "It is based on high fiber and low carb, and it's watching sugar levels very much."

The students are part of a study by Dr. Arthur Agatston whose book, "The South Beach Diet," has inspired millions of Americans to cut carbs and swear off sweets.

"Because of the success of the book, it really gave me a new opportunity, and, I think, an obligation as well, to change the way America eats, and the way we're eating is still a disaster," Agatston laments.

All the kids asked by Smith if they feel like they're on a diet raised their hands. She suggests that may be because there are rules now; some foods are not allowed.

"We are not having the breaded chicken patties or the turkey with gravy or the pork with gravy," says Jean Palmore, food services director of the Osceola School District.

Also, Smith notes, no white bread (only whole wheat) and sweet potatoes instead of mashed.

At the beginning of the year, every student weighed in and their blood pressures and pulses were recorded. They'll do the same thing in a month or so to see if the plan is making a difference.

But the real trick, Smith observes, is getting kids to actually eat those foods, and that's no piece of cake. At first, nearly half the kids refused to eat lunch.

But they're slowly coming around.

Comments one student, "I got used to eating it. Now it's a habit. I like eating nutritious foods."

Another says he's lost 5 or 6 pounds, and no one calls him fat anymore.

Still, it's way too soon to tell if these kids will keep eating right for life. Adults certainly know how tough that is.