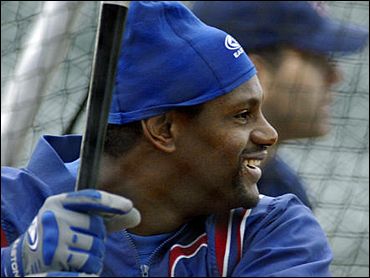 Sosa immediately appealed the suspension, which means he'll be able to play in this weekend's series against the New York Yankees at Wrigley Field. Cubs general manager Jim Hendry said Sosa hopes to get the suspension reduced.

A piece of cork was found just above the handle in Sosa's bat Tuesday night when it shattered after he grounded out in the first inning of the Chicago Cubs' 3-2 victory. Sosa insists it was a mistake, saying he accidentally pulled out a bat he uses to put on home run displays for fans in batting practice.

But MLB still decided to sanction the Cubs slugger.

"After an intensive investigation that included numerous interviews with club personnel and the examination of all of his bats, as well as those held by the Hall of Fame, it appears that Sosa's use of an illegal bat last Tuesday was an isolated incident," vice president of on-field operations Bob Watson said in a statement.

"Nonetheless, Sammy Sosa used an illegal bat during a league game by his own admission. As such, I considered all relevant precedent and determined eight games was the appropriate sanction."

Other players who've used corked bats have been suspended for up to 10 games. Last month, Arizona Diamondbacks pitcher Miguel Batista was suspended for ten games for beaning a hitter and being involved in a brawl.

Sosa said earlier: "Whatever they decide to do, I have to deal with it."

According to the league, Sosa violated Major League Baseball Rule 6.06 (d). It reads:

"A batter is out for illegal action when…he uses or attempts to use a bat that, in the umpire's judgment, has been altered or tampered with in such a way to improve the distance factor or cause an unusual reaction on the baseball. This includes, bats that are filled, flat surfaced, nailed, hollowed, grooved or covered with a substance such as paraffin, wax, etc."

This year, Sosa is hitting .281 and has six round-trippers.

In his 15 major league seasons — all with the Cubs except for a brief stint with Texas his first year — Sosa has compiled a .278 average and 505 home runs.

Sosa has been baseball's quintessential good guy the last five seasons, a lovable slugger with an infectious smile and a feel-good story. While Mark McGwire and Barry Bonds got the home run records, Sosa got most of the adulation.

"To get caught and it's Sammy - that's a big deal. That's a huge deal," Cincinnati Reds pitcher Danny Graves said. "That's like saying Roger Clemens is scuffing the ball. It just totally breaks your heart, you know what I mean? I'm not saying Roger Clemens scuffs the ball. I'm just using his name because he's the best pitcher in baseball."

But Sosa swears he's never used anything illegal. Dozens of his bats have broken over the years without anything suspicious being found.

And if he was trying to cheat, he said, why wouldn't he have tried to grab the bat before anyone saw it?

"I would have come back to the plate and picked up all the pieces, don't you think?" he said. "I didn't pick it up. I went to the dugout. So you guys can see the difference."

But how did this happen in the first place?

Sosa uses bats made by three different manufacturers. While each brand is visibly different, Alderson said all bats made by the same maker look similar. The bat Sosa used Tuesday night was made by Tuffbat.

Atlanta's Chipper Jones said it's easy to see how Sosa could have grabbed the wrong bat.

"I've got five boxes of bats in there," Jones said. "Bat doesn't feel good, you throw it in this box. Bat feels good, OK, that's going to be a gamer. You go 10 at-bats without getting a hit, you throw it in a box, get a new one. You're always interchanging."

After what happened this week, baseball probably needs to address that, Alderson said.

"If this was a batting practice bat, the possibility of confusing that bat would suggest that we probably ought to be awfully careful about having any of those bats around," he said. "It's not something we've looked at, but we will."

Sosa was greeted with rousing cheers when he did his traditional sprint to right field Wednesday night, and fans gave him a standing ovation when he came to the plate in the first inning.

One fan held up a sign that read, "Still loving Sammy."

"They know that I am an innocent person," Sosa said. "When I went to right field, everybody was cheering for me. I feel very happy inside. It's something I'm never going to forget."