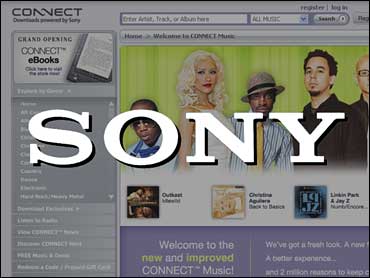 Acknowledging its proprietary audio technology was a marketplace flop, Sony Corp. is shuttering its Connect digital music store and will open its portable media players to other formats.

The moves were announced Thursday at a Berlin consumer electronics trade fair as the Japanese electronics pioneer unveiled a pair of new digital Walkmans that can play the Windows Media Audio, MP3 and AAC audio formats.

Like rivals' players, including Apple Inc.'s iPods, Sony's NWZ-A810 and NWZ-S610 can also play video and display photographs. Sony's models include an FM tuner, too.

Sony said it would phase out operations of its struggling Connect online store, which sold songs in the company's proprietary ATRAC format.

"This gives customers greater flexibility in their music software approach," the company said in a statement. "As a result, Sony will be phasing out the Connect Music Services based on Sony's ATRAC audio format in North America and Europe."

In an e-mail sent to Connect users, the service said it would not close before March 2008, but it did not set a more specific date. The company's Connect e-book service for the Sony Reader is not affected.

Why cats can't resist thinking inside the box

The Beluga whale that could talk

In June, Sony Connect Inc. said it was eliminating some positions as part of a restructuring plan to shift resources to other online services, but had denied reports it was related to a planned shutdown.

Sony Connect launched in 2004, but like other online music services, it has had a tough time competing against Apple Inc.'s iTunes Store, which is tied to the market-leading iPod portable player.

"With this initiative, Sony is debuting an important option for digital media players as it opens new doors for a rich digital experience," said Dave Wascha, director of Windows Client Product Management at Microsoft Corp.