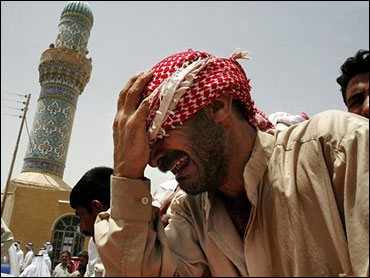 Iraq's prime minister said Tuesday that U.S. and other foreign troops could begin handing over security to Iraqis in selected cities, although he opposes setting a timetable for the complete withdrawal of multinational forces.

Underscoring security concerns, a car bomb killed at least three people and wounded 15 Tuesday in the ethnically tense northern oil city of Kirkuk, police said. An American soldier died of injuries suffered in a land mine explosion south of the capital, the U.S. command said.

Al-Jaafari said he opposed such a timetable "when we are not ready" to assume responsibility for defending the country against the insurgents. However, al-Jaafari added that security in many of Iraq's 18 provinces has improved so that Iraqi forces could assume the burden of maintaining order in cities there.

"We can begin with the process of withdrawing multinational forces from these cities to outside the city as a first step that encourages setting a timetable for the withdrawal process," al-Jaafari said. "We don't want to be surprised by a decision to withdraw at a time when we are not ready."

He didn't specify which cities where he felt the redeployment could occur.

Last weekend, The Mail on Sunday newspaper of London published a leaked British government memorandum showing that Britain is considering scaling back its troop presence from 8,500 to 3,000 by the middle of next year, saving an estimated $1 billion annually.

In Kirkuk, a car bomb went off in an industrial district as pedestrians were passing by, police Capt. Farhad Talabani said. Police rushing to the scene of the blast came under fire and three were wounded, one critically, police Col. Ahmed Hamawandi said.

Police said the bombing did not appear to have been a suicide attack, and no group claimed responsibility.

Kirkuk, 180 miles north of Baghdad, is located in one of the richest oil fields in the Middle East and is home to Arab, Kurdish and Turkomen communities, each vying for power there.

Iraqi troops, meanwhile, detonated about three tons of explosives found near oil fields in southern Iraq, a military spokesman said. The explosives, including 1,282 mines, 628 mortar rounds and 825 artillery shells, were discovered by Oil Protection Services who called the army to remove them, Capt. Firas al-Tamimi said.

Al-Tamimi said the explosives were believed to have been planted by Saddam Hussein's forces after the 1990 invasion of Kuwait — possibly to prevent the oil fields from falling to U.S.-led troops when they drove Iraqi troops from the emirate the following year..

The U.S. military said an American soldier has died of injuries he sustained when his patrol struck a land mine south of Baghdad.

The explosion occurred at around 9 a.m. Monday, the military said Tuesday. Three other soldiers were wounded in the attack near Mahmoudiya, which is about 20 miles south of Baghdad.

At least 1,756 members of the U.S. military have died since the beginning of the Iraq war in March 2003, according to an Associated Press count. At least 1,352 died as a result of hostile action. The figures include five military civilians.

In Baghdad, gunmen assassinated a police colonel, Amir Mirza, in a market in the city's Wahda district, police said. The gunmen escaped.

Elsewhere, the country's largest Sunni political party condemned the deaths in police custody of up to 10 Sunni Arabs detained last weekend. The Iraqi Islamic Party said the men suffocated after being locked in a van for 14 hours in 105-degree temperatures.

In a statement Tuesday, the Iraqi Islamic Party denounced "this savage crime" and the "barbaric way citizens are being treated" in Iraq.