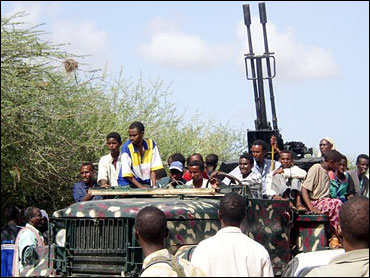 Hours after the Islamic militia attacked the town of Jowhar from three directions, the warlords' remaining forces fled east, some in pickup trucks with rooftop-mounted machine guns. Militiamen seized the airport, about 6 miles outside downtown. Residents were fleeing, and witnesses reported as many as 19 dead.

The Islamic Courts Union and its allies now control all of southern Somalia except Baidoa, seat of the weak transitional government. The militia seized the capital Mogadishu, also in the south, last week after months of fighting that has killed more than 330 people, many of them civilians.

Northeastern Somalia is run by an autonomous government allied to President Abdullahi Yusuf. Central Somalia, where some warlords have fled, is controlled by several groups.

Parliament's approval of Yusef's plan to bring in African peacekeepers from around the region sets the government up for a confrontation — possibly violent — with the Islamic Courts Union, which has repeatedly rejected the idea of foreign troops in the country. Sudan and Uganda have already agreed in principle to send forces to try to help the government restore order.

The Islamic group, accused by the United States of harboring al Qaeda, portrays itself as free of links to Somalia's past turmoil and capable of bringing order and unity. Yet the future of a country accustomed to moderate Islam would be uncertain under the control of hard-line Islamic rulers.

Somalia has been without an effective central government since 1991, when largely clan-based warlords overthrew dictator Mohamed Siad Barre and turned on one another. The interim government, formed with the support of the United Nations and formerly rival warlords, has failed to assert control outside its base 155 miles from Mogadishu.

U.S. officials have acknowledged backing the warlord-led Alliance for the Restoration of Peace and Counterterrorism against the Islamic group, which Washington accuses of harboring three al Qaeda leaders indicted in the 1998 U.S. Embassy bombings in Kenya and Tanzania.

After taking Mogadishu, the group sent a letter proclaiming it was not an enemy of the United States.

In the fight for Jowhar, clan elders urged the warlords to leave to avoid a confrontation, two Somali officials said on condition of anonymity because of the sensitivity of the issue. Witnesses told The Associated Press that the warlords did not want to be disarmed by the Islamic fighters and fought their way out.

A witness at Jowhar's main hospital counted 19 bodies, 18 of them fighters and one civilian. Doctors were not immediately available for comment because they were busy treating the injured.

Ali Mohamed Siyad, a commander with the Islamic militia, said he knew of two dead fighters but could not say to which side they belonged. Siyad said at least 14 fighters and one civilian were injured.

In response to the Islamic militia's growing power, the Unites States is convening a meeting on Somalia in New York on Thursday.

Henry Crumpton, the State Department's counterterrorism coordinator, told the U.S. Senate Foreign Relations Committee on Tuesday that his department didn't anticipate the events in Somalia and has an "imperfect understanding" of the Islamic group.

Only one African country — Tanzania — was expected at the first meeting of the Somalia Contact Group. But U.S. State Department spokesman Sean McCormack said other countries may be added.

The warlords who fled Jowhar late Tuesday included two former members of Somalia's transitional government, Mohamed Qanyare Afrah and Botan Isse Allen, the officials said. They were loyal to Mohammed Dheere, the alliance's main leader who was reportedly in Ethiopia trying to raise support for his forces.

Mohamed Jama, a militiaman loyal to Qanyare, confirmed to AP that Qanyare and Allen had left Jowhar at night with some pickups mounted with machine-guns and scores of militiamen. He said they were now in the town of El Bur, 200 miles northeast of Mogadishu.