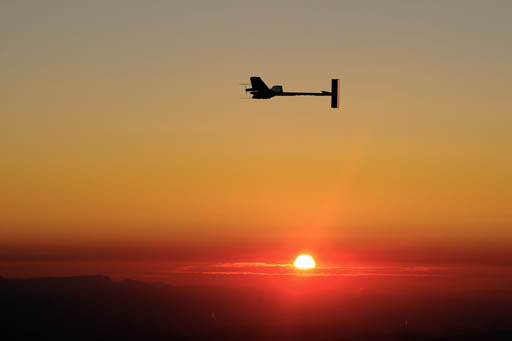 Last July, a team of Swiss adventurers made history when their solar-powered manned aircraft flew continuously for a 26 hours. Now, they're about to take the next step - and it's a big one: nothing less than an international flight.

The Solar Impulse team says the flights to Belgium and France, slated for Tuesday, are a big challenge because the plane will need to navigate across international air traffic networks.

The single-seater prototype with the wingspan of a Boeing 777 made its 2009 maiden flight in Switzerland and further tests have all taken place there. Pilot Andre Borschberg said last Thursday the success of the first cross-border flights depends on the team receiving authorization from national authorities.

This will be the biggest test yet for a project that intends to prove it can produce an aircraft which can circumnavigate the globe by using only solar energy. No dates have been been set in stone but people involved with Solar Impulse have talked about attempting such a flight taking place in 2012.

The Solar Impulse project is run by the Swiss technical institute École polytechnique fédérale de Lausanne. Among other things, the project wants to demonstrate that that emissions-free air travel is possible with the broader idea of testing and promoting new energy-efficient technologies.

The team behind Solar Impulse say the craft will take off to Brussels when the weather conditions are right. The choice of Brussels was not simply made on a whim; the Solar Impulse program has received financial support from several European Union organizations (as well as from private donors.)

The plane is expected to participate in the 49th International Paris Air Show, which takes place from June 20-26.