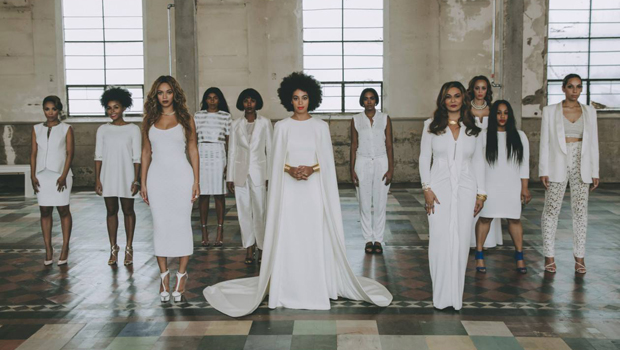 It was a very fashion-forward wedding for Solange Knowles and Alan Ferguson.

The singer and music video director tied the knot in New Orleans over the weekend, and style-watchers eager to see what the bride wore were not disappointed when Vogue unveiled their official wedding portraits.

Knowles, 28, wore a Humberto Leon for Kenzo floor-length gown with an attached cape. She paired the look with Jill For Lady Grey bracelets and Stuart Weitzman shoes, per Vogue, while her new husband wore a white ensemble by Lanvin.

The bridal party -- including big sister Beyonce and their mother, Tina Knowles, were all decked out in matching white. Brother-in-law Jay Z and niece Blue Ivy were also among those in attendance.

Knowles arrived at the ceremony sporting a very different (but equally stylish) bridal ensemble -- an ivory jumpsuit by Stephane Rolland with a plunging neckline and coordinating cape.

This is the second time down the aisle for the singer, who has a 10-year-old son, Daniel Julez Smith Jr. The two of them were caught on video dancing together at the reception:

Solange and Julez NO FLEX ZONE from Charlotte Hornsby on Vimeo.