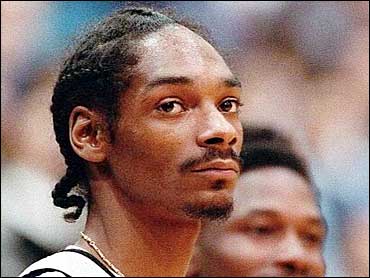 A celebrity makeup artist has filed a $25 million lawsuit against rapper Snoop Dogg, alleging he and several men in his entourage drugged and raped her two years ago.

The woman also claims that one of Snoop Dogg's associates beat her following a taping of ABC's "Jimmy Kimmel Live" show, which the rapper guest-hosted in January 2003. The lawsuit was filed Friday in Los Angeles County Superior Court.

In addition to Snoop Dogg and three associates, the suit names The Walt Disney Co. and its parent company, ABC Inc. The woman identifies herself in the documents, but The Associated Press is withholding her name because she is an alleged rape victim.

The woman applied Snoop Dogg's makeup before four shows, according to the lawsuit, which said she was drugged with spiked champagne after his final appearance.

Snoop Dogg, whose real name is Calvin Broadus, filed a lawsuit Dec. 11 alleging that the woman had been trying to extort $5 million in exchange for keeping silent. He is seeking punitive damages and to bar her from future threats.

"It is truly unfortunate that (she) has chosen to follow the increasingly common path of misusing the legal system as a means of extracting financial gain from entertainers," Snoop Dogg's publicist, Meredith O'Sullivan, said in a statement Monday.

Kevin Brockman, a spokesman for ABC, said the allegations have "simply no merit."

A spokeswoman for the Los Angeles Police Department said she didn't know whether the woman had filed a police report. According to Snoop Dogg's complaint, the woman waited six months after the alleged incident to go to police. No charges were ever brought.

The woman's attorney, Perry Wander, said she waited two years to sue because she had been trying to negotiate a settlement with the media companies. Disney and ABC should be held responsible because they "failed to provide a safe working environment for my client," Wander said.