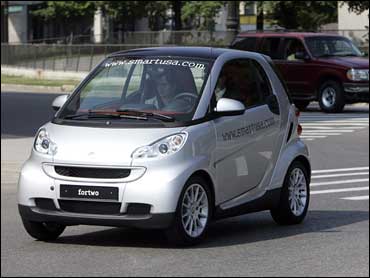 The tiny two-seat Smart car is a common sight on the congested streets of European capitals, something DaimlerChrysler AG is eager to duplicate in cities like New York and Los Angeles when it begins selling the vehicle in the United States next year.

But alongside the promise of fuel efficiency — the Smart fortwo can get around 40 miles per gallon — and of parking in the narrowest of spaces, the automaker will have to convince American drivers braving roads filled with sport utility vehicles that the micro-car is also safe.

At just 8.8 feet long and slightly wider and taller than 5 feet, it is already one of the smallest cars on any road in any country; it weighs around 1,700 pounds.

Compare that to a Ford Explorer, a sport utility vehicle 6 feet high, more than 6 feet across and nearly 16 feet long, weighing 4,436 to 4,606 pounds, and it's not hard to see why safety might be a concern.

Still, in an accident, "the laws of physics can't be repealed," said Russ Rader of the Arlington, Va.-based Insurance Institute for Highway Safety. "Even with modern safety features like multiple air bags, people in small, light cars are always at a disadvantage in crashes."

The fortwo, slightly bigger than the European version, with a three-cylinder, 700cc engine, is scheduled to hit the U.S. market in early 2008. The base model will be priced at about $12,000. An intermediate version is expected to start at $14,000 and will boast air conditioning, alloy wheels and a panorama roof. A Cabriolet version will start at around $17,000 and feature an upgraded sound system with MP3 capability and a six-disc CD changer.

Sales and service will be handled by United Auto Group Inc., with the first dealerships to be announced later this year.

So far, the new fortwo and its predecessors have not undergone crash testing in the United States, according to records kept by the National Highway Transportation Safety Administration.

But crash testing on the latest model hasn't been done in Europe, either. Christel Martin of the Brussels-based Euro NCAP, an agency that assesses cars sold in Europe, said that it "is included in our testing program and the results should be available by the end of October."

A previous model, the Smart fortwo City Coupe, was tested in 2000 and achieved a three-star rating out of five possible.

The NHTSA has not yet said when it will conduct its own tests and Rader said his group has yet to assess it.

Some versions of the Smart car have been brought to the United States by importers directly from Europe, but modified to accommodate U.S. standards. California-based ZAP Corp. has been importing fortwos since 2005, and had to make them meet U.S. safety standards, including reinforcing the doors with aluminum cross beams and adjusting the engines to meet EPA emission standards.

Smart USA spokesman Ken Kettenbeil said U.S. tests are likely to be completed this year with the result released in the fall, and that the company expects a four-star crash rating.

In Europe, where smaller cars are more numerous and mismatched collisions less likely, size has not been a problem, said Vicenzo Luca, a spokesman for Germany's ADAC, Europe's biggest automobile club.

The new model, nearly 8 inches longer, features improvements including a steel safety cage ADAC's Luca likened to a race car designed to protect the driver and spread out the energy from a crash across the car.

Smart also has touted the two "crash boxes" in the front and rear of the car that help spread energy from a collision across the safety cell.

The new model also includes complete driver and passenger front and side air bags. A collapsible steering column is designed to retract if there is a serious front-end collision. The seats have seatbelts that adjust to motion changes to tighten or release.

DaimlerChrysler said the additions are part of its adherence to better safety in all its cars, from the big Mercedes-Benz models to its SUV Dodge Nitro.

Smart USA Distributor LLC, part of United Auto Group Inc., launched a 50-city U.S. road show in May to give would-be buyers a chance to test drive the fortwo. The campaign has been to Detroit, Los Angeles, Minneapolis and Boston and is scheduled to go to other cities including New York, Charlotte and Seattle.

At a stop in Detroit Tuesday, Dave Schembri, president of Smart USA, said he expects to have between 40 and 60 dealerships open by Jan. 1.

Schembri said the U.S. target market is not a certain age or income level, but rather one of attitude and lifestyle. He said he plans to tap that market through the road show and other nontraditional marketing, including on the Internet.