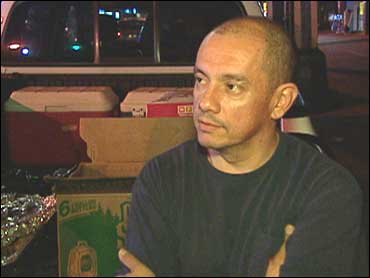 These tough times have been especially tough on the neediest Americans - and those trying to help them. More than 80 percent of food banks report that the need is so great, they may have to make cutbacks just to keep up. And that's moved others to step in. One man's recipe for generosity is helping to feed The Other America.

It's not easy cooking dinner for 60 in a cramped kitchen.

But Luz Munoz and her mother, Doris, have a lot of practice. They've done it almost every day - for three years.

In the working-class neighborhood of Queens, New York, when CBS News correspondent Seth Doane went to visit her, he said: "You have rice on your couch. You have hot chocolate piled on the coffee table!"

"Mayonnaise on the bottom of the tables, yes, there's mayonnaise," Luz says.

This all started when Luz's brother Jorge had an idea after he passed a local restaurant that was throwing out food.

A school bus driver, Jorge sees those who "really need it" every day.

But not really. He makes about $650 a week, and says it's a stretch to pay his own bills. But, there's always someone who has it worse.

What did Luz think when Jorge started doing it?

Every day, they pack up food, and head across town to a line of people waiting.

For most people there, the meal they receive is the only one they can count on.

The guys standing in line remind Jorge, now a legal immigrant, of himself.

Those who've come for a better life … which is sometimes hard to find.

"How difficult is it to make enough money to eat on your own?" Doane asked Martin Moreno, a day laborer from Mexico.

Meanwhile, Jorge spends about half of his paycheck each week making these meals.

Learn how Seth found and reported this story at Couric & Co. Blog

Lately, a local restaurant has started chipping in - and other donations help keep them going.

"Do you worry about where the money is coming from - where you're gonna get the donations, how you're going to keep doing this?"

"Sometimes yes - but if I keep thinking about that - i'm gonna get scared so I just keep it... If I get food for tomorrow... Tomorrow to the next day - the next day," Jorge said.

But tonight, he's more concerned for guys like Ramiro. This is the first meal he's had today. Now, the next worry is, where to sleep.

Jorge hands him $2, just enough to buy a ticket on the New York subway - where he'll try to sleep sitting up.

"What would you have done for food if Jorge hadn't fed you?" Doane asked.

"I would have gone to sleep without having eating anything," Ramiro says.

Nourishing another man today is a victory for Jorge. Doing it all - with just a tiny kitchen and a big heart.

If you'd like to help, or learn more about Jorge's operation, click here.
View CBS News In
CBS News App Open
Chrome Safari Continue
Be the first to know
Get browser notifications for breaking news, live events, and exclusive reporting.