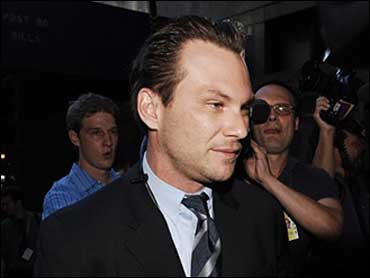 Groping charges against Christian Slater will be dropped if the actor stays out of trouble for the next six months, under a plea agreement reached with prosecutors.

"The case is dismissed, and we are very pleased with the outcome," his lawyer, Eric Franz, said Monday outside Manhattan Criminal Court.

In July, the actor had rejected a plea bargain that would have required him to perform three days of community service in exchange for pleading guilty to second-degree harassment.

Slater, 36, was arrested May 31 and charged with forcible touching for allegedly groping a woman during a late night run-in on the Upper East Side. As he was escorted out of the police precinct and put into a car, Slater told onlookers, "I didn't do anything, This is bull----!"

He faced up to a year in jail if convicted.

Slater, whose credits include "Heathers," "Broken Arrow" and "True Romance," was appearing in "The Glass Menagerie" on Broadway at the time of his arrest.

It was not his first run-in with the law. The actor was sentenced to 90 days in jail for an August 1997 incident where he reportedly bit one man in the stomach and threw a police officer against a wall during a rowdy Los Angeles party.

In 1998, Slater served 59 days in jail in La Verne, Calif., on battery and drug charges. Good behavior cut down his three-month sentence.