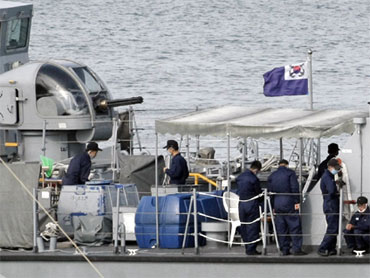 South Korea's troops went on high alert Wednesday for possible retaliation by North Korea after one of its navy ships was nearly destroyed and an officer reportedly killed in a skirmish with the South, ahead of a visit by President Obama.

The clash Tuesday along the disputed western sea border was the first such engagement in seven years, sending tensions soaring about a week before Mr. Obama travels to Seoul as part of his Asian tour.

The exchange of fire also occurred just hours before the State Department announced a senior U.S. diplomat will travel to North Korea before year's end to try to entice North Korea back into international negotiations on nuclear disarmament. The dispatch of envoy Stephen Bosworth would mark the first direct talks between Washington and Pyongyang since Mr. Obama took office in January.

Secretary of State Hillary Rodham Clinton said Wednesday at an economic summit in Singapore that the naval skirmish would not affect plans for the American diplomat's visit.

Late Tuesday, Kim said in parliament that he believed the North may take retaliatory action. "The president also has such concerns," Kim said.

South Korea's 680,000-strong military was on heightened alert but detected no unusual North Korean troop movements, an officer at the Joint Chiefs of Staff said.

The South Korean officer, speaking on condition of anonymity citing department policy, said the heightened posture meant having troops stay vigilant but that there were no additional deployments in border areas. South Korean ships did routine patrols along the sea border Wednesday, he said.

Presidential security adviser Kim Sung-hwan was quoted as saying by Yonhap news agency that signs of a North Korean retaliation have not been detected. Kim, however, said North Korea may take time before retaliating.

Yonhap also quoted an unidentified government official as saying that North Korea had also put its troops on high alert.

Despite the heightened tensions, hundreds of South Koreans crossed the land border to commute to a joint industrial complex in North Korea, according to Seoul's Unification Ministry.

Kim Seong-man, a retired South Korean vice admiral, said the North would take some retaliatory action, such as triggering another sea battle.

The Koreas blamed each other Tuesday for causing the skirmish in the rich crab-fishing area, where both sides regularly accuse the other of border violations.

South Korea said North Korean ships have violated the sea border 22 times this year, while the North last month accused South Korean warships of broaching its territory and warned of a clash.

A North Korean patrol boat crossed the disputed sea border before noon on Tuesday, drawing warning shots from a South Korean navy vessel, South Korea's Joint Chiefs of Staff said in a statement. It said the North Korean boat then opened fire and the South's ship returned fire before the North's vessel sailed back toward its waters.

South Korean media reported that about four or five more South Korean ships were in the area and fired a total of about 200 rounds from their machines guns. South Korea's military said it could not confirm the reports.

South Korean Prime Minister Chung Un-chan said Tuesday the North Koreas may have been clamping down on Chinese fishing vessels in the area, and probably did not intend to violate the border.

But Shin Yul, a political scientist at Seoul's Myongji University, however, said that it was "an intentional provocation by North Korea to draw attention" ahead of Obama's two-day visit starting next Wednesday.

The two Koreas are still technically at war and the U.S., which fought as part of U.N. forces on South Korea's side, has never had diplomatic relations with North Korea.

Washington has consistently said that Pyongyang must abandon its nuclear arsenal for any peace treaty to be concluded. North Korea has conducted two underground nuclear tests since 2006 and is believed to have enough weaponized plutonium for half a dozen atomic weapons.

The U.S. will send Bosworth to North Korea in part of its efforts to get the North to return stalled six-nation nuclear talks involving the two Koreas, the U.S., China, Russia and China.