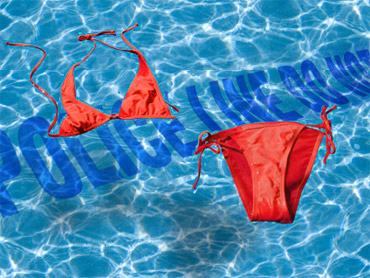 (CBS/iStockphoto)
HUNTINGTON BEACH, Calif. (AP) Huntington Beach police are looking for a group of skinny-dipping teenagers who pushed a security guard who couldn't swim into an apartment building pool.

Police said Tuesday that the 21-year-old security guard was pulled out of the pool by a bystander and taken to a hospital. He was treated and released.

The rescuer, Brandon Quick, says he saw a group of young men running away and three teenage girls putting their clothes on as he arrived home early Sunday morning.

He said he saw one of the girls push a security guard into the pool and laugh while the man flapped his arms up and down and called for help. The girls then ran away.

Police say the girls could be arrested on suspicion of assault.

More At The Orange County Register