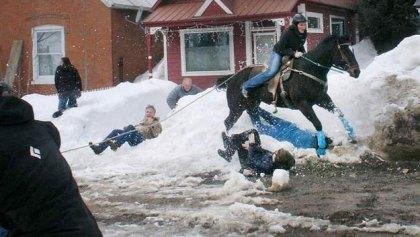 SILVERTON, Colo. -- Three people were run over by a horse that was apparently spooked by a low-flying drone during the annual “Skijoring” race in Silverton on Saturday.

The Skijoring race features horses pulling skiers through the street.

The Durango Herald reports that two women were taken away in an ambulance, one with a hip injury and one with a gash to the back of the head. Another man suffered a minor chin injury, but did not need an ambulance.

The horse rider was trying to wave the drone away when his horse became agitated and then charged into a crowd of spectators.

The competition was shut down for about 30 minutes.

The drone pilot was given a ticket for illegally flying over the crowd and drones are no longer allowed at the event.

Last year a horse had to be euthanized after a crash at a Skijoring race in Leadville.