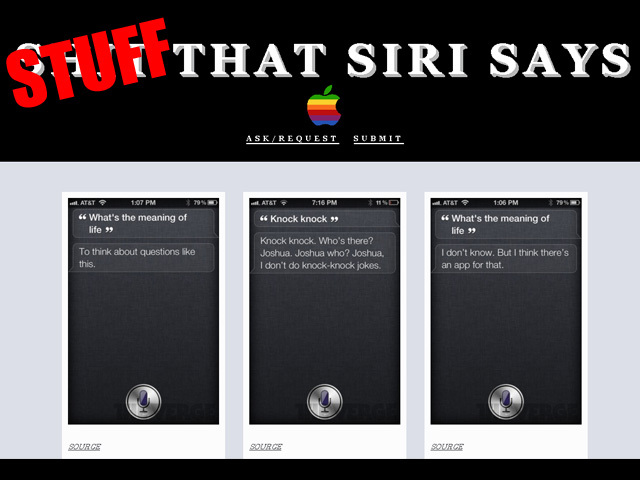 While we've become lunatics who obsessively talk to electronic devices, Siri remains as cool as a cucumber.

Musician Jonathan Mann managed to sing a hilarious duet with Siri, which is posted above. Mann uses some of the most popular questions people have been asking Siri, like "will you marry me?" and "what is the meaning of life?"

You'll have to watch the video to see the Siri's snarky answers.

The Tumblr blog called "S*** That Siri Says," features screen shots of Siri making witty remarks and giving witty answers. The blog doesn't claim an official author, but it does give photo credits to Joshua Topolsky, who published the original screen shots on Thisismynext.com.

"Knock Knock," Topolsky says. Siri responds with, "Knock knock. Who's there? Joshua. Joshua who? Joshua, I don't do knock-knock jokes."

We just love the cultural references that Siri has picked up since Apple bought the company and updated her software. The most fitting example is when Topolsky asks Siri to "open the pod bay doors." She responds with, "I'm sorry Joshua, I'm afraid I can't do that. Are you happy now?" Queue the theme from "2001: A Space Odyssey."

And that isn't the only site to pop up. "S*** Siri Says" and "S*** iSay to Siri" also post funny and sometimes inappropriate questions to Apple's new personal assistant. Siri is quickly becoming a favorite feature of the new iPhone 4S and we must concur!

Oh, Siri. We look forward to more awkward and snarky responses to stupid questions. We love you, sassy girl.