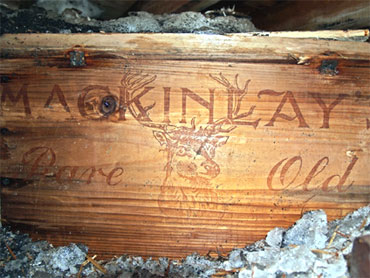 (Emily Stone/GlobalPost)
One hundred years ago Sir Ernest Shackleton attempted to reach the South Pole. He and his companions came within 114 miles of the pole, and he was knighted for his extraordinary achievement. A key element in exploring such a frigid climate at that time was a good supply of whisky. According to a GlobalPost story, a few years ago two cases of Charles Mackinlay & Co. whisky were found stashed under floorboards in a hut at Cape Royds on the Antarctic coast where Shackleton staying in 1909. Next year, conservationists expect to retrieve the cases from their icy tomb.

Read the full story at GlobalPost