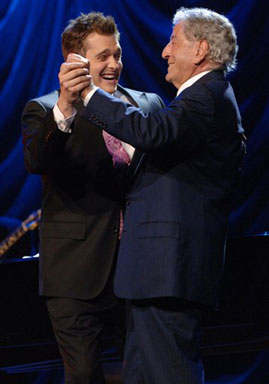 New York Mayor Rudy Giuliani may have dropped out of the race for the U.S. Senate, but he's not out of the eye of the storm.

A new biography of Giuliani claims his father served time in Sing Sing prison for armed robbery and that some of his relatives had ties to organized crime.

The book, Rudy: An Investigative Biography of Rudolph Giuliani by Village Voice reporter Wayne Barrett, alleges that Giuliani's father, Harold Giuliani, served a one-and-a-half year prison term after robbing a milkman at gunpoint in 1934, a decade before his son was born.

Harold Giuliani died in 1981 at age 73 of prostate cancer, the same disease that forced the mayor to drop his bid for the Senate against Hillary Rodham Clinton.

Giuliani has refused comment on the book. But earlier this week, he said his father's past died with him and that it had nothing to do with his job as mayor.

"He taught me enormously important lessons, including the lesson of being honest, which I've practiced all my life," Giuliani said.

Barrett has made government documents backing up his reports about the mayor's father available on the Web site, the Smoking Gun.

The book also reports that Lewis D'Avanzo, a first cousin of Giuliani's, was a mob associate who ran a large stolen car ring and was killed by FBI agents in Brooklyn in 1977. At that time Giuliani was an assistant U.S. attorney in Manhattan and had not seen his cousin since they were in grade school together.

Another cousin, Joan Ellen D'Avanzo, who was raised in the same house as Giuliani, became a junkie and was beaten to death in 1973, according to the book.

In response to questions about Barrett's book and a second new biography – Rudy Giuliani: Emperor of the City by political reporter Andrew Kirtzman – mayoral spokeswoman Sunny Mindel said, "The mayor hasn't seen these books, he's not going to read these books and therefore he has no comment."

Kirtzman's book, which focuses on Giuliani's two terms as mayor rather than his personal life, claims Giuliani's former press secretary, Cristyne Lategano-Nicholas, urged him to avoid appearing at events with black audiences, fearing he'd be booed.

Lategano-Nicholas denies the allegations. "It's not true," she said Wednesday. "And if you want to elaborate on my quotes, when unnamed sources are finally named, I will respond further."

While the books may cause some unwelcome attention for the mayor, they're unlikely to have the impact they would have had if he were still in the Senate race. Barrett's publisher, Basic Books, reduced its first printing to 45,000 copies from 100,000 after Giuliani ended his run. Kirtzman's publisher, William Morrow, is printing 40,000 copies.

Both publishers had originally planned to release the books in the fall as the Senate race heated up, but elected to put them out earlier after Giliani's withdrawal.

Although Giuliani's political future is in doubt, Barrett thinks there's still plenty of interest in what the mayor will do next.

"His future is uncharted water," Barrett told The New York Times. "I don't think he's going to disappear into the sunset with sailboats."