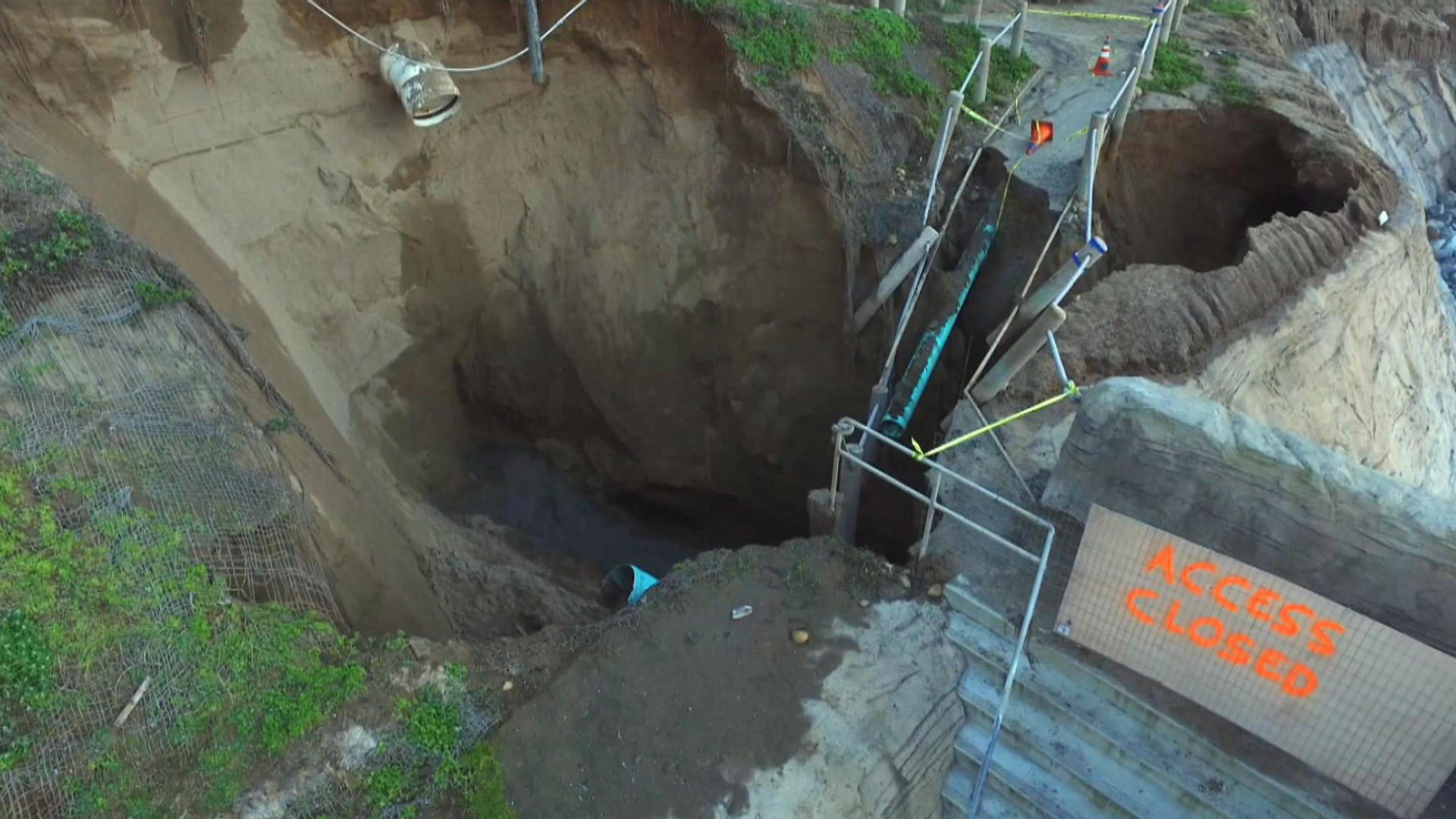 Powerful storms and high tides in Northern California could slow efforts to fill a large sinkhole that first appeared Saturday.

A 15-foot section of a cliffside trail just dropped away into the ocean in Pacifica, reports CBS News correspondent John Blackstone. The trail is now off limits as crews pump concrete and sand into the massive sinkhole.

This is only the latest effort to stop erosion of the cliff here that has been falling away for decades.

“We’ve seen waves up pretty high and the king tides are bad every year, but this is the worst I’ve seen it,” said Rebecca Watry, who lives nearby. King tides refer to the highest tides of the year, often made worse during a full moon.

The company that owns the land told “CBS This Morning” an underground pipe separated, causing leaking water to saturate the ground below. As crews work to stabilize the area, powerful tides are moving in.

“Sand just, you know, washed away and that’s why we have big cavity,” said Nasser Elsalhi, a contractor.

The cliffs here are more than 100 feet tall, and when the base is pounded by high surf, the bluff is undermined.

“When you get the big breakers and... ground swells coming in, that really takes a beating on these things,” said Rick Ghilgliazza, who grew up in the area.

“I have memories of when I was a child here and I take my wife out here now and try and find the places where my dad and I fished years ago, they’re gone,” Ghilgliazza said.

Houses that were once here are gone too. When major El Nino storms hit California in 1998, the bluffs eroded so quickly residents fled before one home tumbled into the ocean. Other houses were knocked down before they, too, fell off the cliff.

Earlier this year, two apartment buildings were demolished as the bluff beneath them continued to drop away. And a third ocean-view apartment complex was condemned as massive erosion put the building at cliff’s edge.

“So you must have come along here, seen those apartments often. Could you ever have imagined that it would be like it is today, hanging off the edge?” Blackstone asked.

“Well gosh, coming out here every storm, yeah, I do,” Ghilgliazza said. “I mean, there’s just nothing stopping this water.”

The view from from the cliff is spectacular in the daytime, which is why there are apartment buildings all along this stretch of coastline. The apartment complex nearest to here was recently renamed “Oceanaire,” perhaps because the previous name conjured up a now precarious image: “Land’s End.”