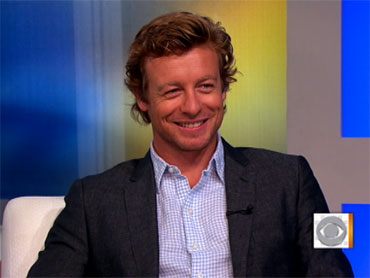 The hit crime drama, "The Mentalist" kicks off its third season with Simon Baker returning as Patrick Jane, the consultant who works with the California Bureau of Investigation and always has a way with words.

Fresh off of a summer filled with globe-trotting, Baker sat down with "Early Show" co-anchor Maggie Rodriquez to discuss the return of an exciting new season.

While Baker slipped right back into the role with ease, he always sees room for improvement.

"I understand the character well enough now that each year, I always sort of... it's almost like a new year's resolution, I want to make things better and sharper. I'm familiar with the character, kind of like putting on a suit that you've owned for a long time and just tailoring it a little bit so that it fits -- take it out where you've put on a little weight, take it out if you've lost a little weight, probably the former as opposed to the latter," he explained.

So, will the sexy star of "The Devil Wears Prada" return to film anytime soon? Listen to what he had to say below.