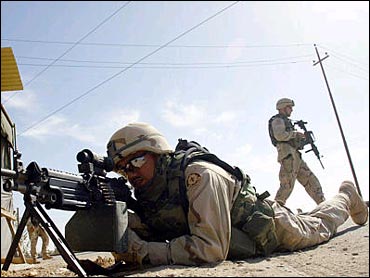 Gunmen killed two journalists south of Baghdad on Friday, and militiamen loyal to a radical Shiite cleric dug in for a confrontation with U.S. troops, clashing with soldiers in two holy cities.

The journalists, a Pole and an Algerian, were shot in their car by gunmen in a passing vehicle near Mahmoudiyah, about 20 miles south of Baghdad, said police Lt. Alaa Hussein. A second Pole was wounded in the attack.

An American missionary and two CNN employees were killed in February and January in the same area.

Al-Sadr's al-Mahdi Army militia was out in force in Kufa and Najaf on Friday, fearing a U.S. assault to capture al-Sadr could be imminent. Militiamen and U.S. troops had a fierce mortar exchange overnight.

Fighters — draped with ammunition belts and carrying automatic weapons and rocket-propelled grenade launchers — moved around the streets of the two cities in large numbers and took positions behind earthen mounds and behind buildings.

"We will fight until the last drop of our blood," said one fighter, Dhia Shami, behind a dirt barricade.