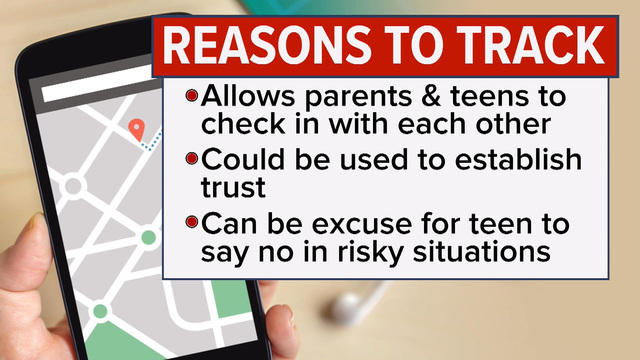 The Pew Research Center has found that 16 percent of parents use cellphone-monitoring apps to track their teen's location. Psychologist Lisa Damour explored this hotly debated topic in a recent New York Times article, writing: "Plenty of adults balk at the idea of remotely following an adolescent's movements, while others question why any loving parent wouldn't."

Damour joined "CBS This Morning" to discuss the pros and cons of knowing where your kid is at any given time, why tracking could be hurt the relationship if parents aren't upfront about it and how this conversation brings both parties to the negotiating table on a number of other topics.

"We have research that tells us that if kids feel like their privacy is being invaded, it does harm to the relationship. We also see situations where it becomes a cat and mouse game, where kids are leaving their phones places, turning their phones off. Putting more energy into trying to get away from their parent than trying to keep themselves safe," Damour said.

She also pointed out that simply knowing someone's location only paints a partial picture of what's going on. Teens could be doing all the wrong things exactly where they're supposed to be. Damour recommends parents be transparent and approach their teens as if they are a partner in the decision.

"I think it has to feel like your teenager is doing it with you. You don't want it to be something your teenager feels is being done to them," she said. "You can say, 'Look, if I'm not hearing back from you and I'm worried, I'm going to check where you are. If your friends want to go somewhere you don't want to go, you can tell them I've said no and that I could find out.'"

On the other hand, Damour argued, there is also value in learning to manage by one's self.

"And parents who don't track, I encourage them to say, 'Look I'm not tracking you. When you're not with me, you are in charge of your safety. You can call me if you need me but I don't want there to be any ambiguity about who's responsible,'" she said.

Above all, keep the conversation open and consider an expiration date.

"I think certainly by 17, 18 parents should be ready to really renegotiate. A lot of parents track their kids who are at college. There's probably good reasons for this," she said. "But at the same time, you think, well it's one thing for your roommate to know you're sleeping over at your boyfriend's dorm, it's another thing for your dad to know you're doing that."

"Tracking — it's like if you pull this thread it gets to all of the big topics in parenting teenagers. Trust, safety, independence, privacy. So these are the tough negotiations of parenting young people, and what I like about this topic is it gets parents and teenagers to the negotiating table. There's no right answer. There's no one way."