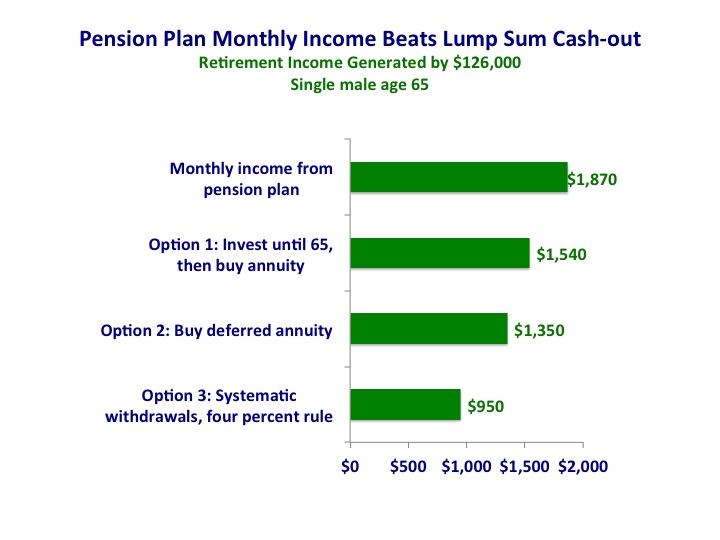 (MoneyWatch) Should you accept a lump sum cash-out of your pension from a former employer? A number of readers have received such an offer and have asked me whether this is a good idea. If you have a sizable pension, this is one of the most important financial decisions you'll make, so it pays to carefully consider the pros and cons.

One of our readers sent me his cash-out election kit to analyze (To protect his privacy, I'll call him "Jim" and refer to his former employer as XYZ Company.) Let's take a detailed look at Jim's offer. If you have a similar pension buyout offer, our considerations and conclusions for Jim will likely also apply to you.

Most Americans don't have sufficient financial resources for a traditional retirement of "not working" starting in their mid-60s. As a result, they'll need to squeeze the most reliable lifetime retirement income from their existing resources. So let's take a look at Jim's cash-out pension offer to see how he can maximize his retirement income.

Jim is 51 years old and is married to Jo, who's 49. Jim worked for many years at XYZ Company, but he's since terminated his employment with XYZ and now works for another company; in pension lingo, Jim is a "vested termination." Most buyout offers made today are for former employees with a vested pension benefit who haven't yet started their retirement income. These buyouts typically aren't offered to retirees who've already started their pension, although Ford and GM made headlines earlier this year by offering buyouts to current retirees.

XYZ Company gave Jim a choice of one of the following options:

If Jim elects the monthly pension, then he can also elect a joint-and-survivor annuity that would continue monthly income to his wife Jo after Jim passes away.

Because Jim is currently working, it makes no sense to start his pension immediately, so we'll dismiss that option from the get-go.

So here's the real question: If Jim takes the lump sum, can he generate a lifetime monthly income at age 65 that's bigger than $1,870 per month? As it turns out, after working through the numbers, I determined that it will be hard for Jim to do this. I estimated Jim's retirement income if he had elected the lump sum cash-out and used three different options to generate retirement income:

The graph shows that it would be very unlikely for Jim to be able to generate a monthly income from his lump-sum payment that's greater than simply taking the monthly retirement income from the XYZ Pension Plan.

Why does the XYZ Pension Plan generate more income than the three options? The answer depends on the specific option.

Stay tuned for my next post on this topic, which explains my calculations in more detail. A third post will discuss considerations other than the amount of retirement income, and answers some questions that individuals commonly ask about these buyout offers.