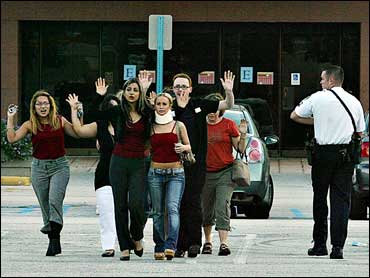 A gunman fatally shot a man in a fight at a crowded mall, then sent hundreds of Christmas shoppers running for cover as he fired at police chasing him, authorities said. Two men were in custody.

"They were able to corner him at the Village department store in the mall, and after a few minutes, they actually were able to bring him into custody without incident," reports Dana Palley of CBS affiliate WPEC-TV.

Fregens Daniel, 20, of Boynton Beach, also was arrested and was charged with acting as principal accessory in the case, Katz said. Bond has not yet been set for Cesar and Daniel.

Police did not disclose the number of shots fired. A motive for the shooting has not been determined, but Katz said the victim, Berno Charlemond, 23, was arrested a month ago at the same mall for carrying a concealed weapon.

"We're still ironing out the details of the case, piecing things together," he said.

Katz said it was miraculous no one else was injured when the shooting broke out in mid-afternoon.

"People had started screaming, crying. Trampling over each other. People were abandoning their stands," said one eyewitness.

"It looked like something out of a movie. I can't believe it. People were just running," said another.

Agate Alphonse said she was on her way to a shoe store when she passed a group of 10 to 15 people punching and grabbing one another. A few moments later, shots rang out.

"Some people got down. Some people ran," said Alphonse, who crouched low and later ran out of the mall.

Sinette White, 19, of Lake Worth, told the South Florida Sun-Sentinel she heard popping sounds while getting her nails done, then saw a man on the ground.

Shoppers gathered around him as police arrived to give CPR, but they heard more shots and police told them to take cover, she said.

The gunman barricaded himself in part of a department store and refused to surrender when officers contacted him through the public address system, Katz said. A police commando team entered the store and captured him without incident, he said.

A mall spokesman, Sam Yates, said the shooting was outside a store within the shopping complex. The mall was evacuated and remained closed for the remainder of the day.

In North Carolina, a man was charged with attempted murder Sunday after a shooting a day earlier at a Greensboro mall packed with shoppers. One man was critically wounded by gunfire shortly before the Four Seasons Town Centre closed Saturday.

It was the second shooting of the weekend at a North Carolina mall.

One man was slightly wounded at Charlotte's Eastland Mall on Friday evening when an argument between two groups of men ended with one firing through glass entrance doors. No arrests were immediately made.