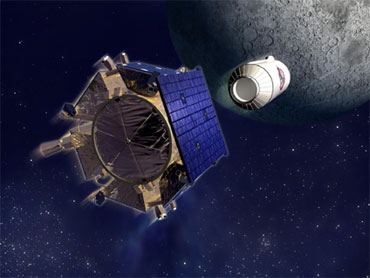 NASA will throw a one-two punch at the big old moon Friday and the whole world will have ringside seats for the lunar dust-up.

NASA will send a used-up spacecraft slamming into the moon's south pole to kick up a massive plume of lunar dirt and then scour it to see if there's any water or ice spraying up. The idea is to confirm the theory that water - a key resource if people are going to go back to the moon - is hidden below the barren moonscape.

The crashing spaceship was launched in June along with an orbiter that's now mapping the lunar surface. LCROSS - short for Lunar Crater Observation and Sensing Satellite and pronounced L-Cross - is on a collision course with the moon, attached to an empty 2.2-ton rocket that helped get the probe off the ground.

Thursday evening, about 10 hours before smashing into the moon, LCROSS and its empty rocket will separate.

Where and how to view the impact

Then comes the first part of the lunar assault. At 7:31 a.m. EDT, the larger empty rocket will crash into a permanently dark crater and kick up a 6.2 mile high spray of debris.

"This is a case where you are going to take what amounts to an SUV and crash it into the surface at two or three times the speed of a rifle bullet," said CBS News space analyst Bill Harwood.

Trailing just behind that rocket is the LCROSS satellite itself, beaming back to Earth live pictures of the impact and the debris plume using color cameras. It will scour for ice, fly through the debris cloud and then just four minutes later take the fatal plunge itself, triggering a dust storm one-third the size of the first hit.

"This is going to be pretty cool," LCROSS project manager Dan Andrews told The Associated Press. "We'll be going right down into it. Seeing the moon come up at you is pretty spectacular."

Within an hour, scientists will know whether water was hiding there or not.

The mission is a set-the-stage venture dreamed up by the NASA office that has been working on a $100 billion program to eventually return astronauts to the moon. The return-to-the-moon goal is now being re-examined by NASA and the White House.

These are not crashes for the faint of heart. The two ships will smash into the moon at 5,600 mph, more than seven times the speed of sound. The explosion will have the force of 1.5 tons of TNT and throw 772,000 pounds of lunar dirt out of the crater. It will create a new crater - inside an old one - about half the size of an Olympic swimming pool, Andrews said.

But don't feel bad for the moon. It gets crashes this size about four times a month from space rocks. But the difference is this one is planned and at just the right angle and location to provide interesting science for astronomers. The southern polar region is a prime landing possibility. This crater, called Cabeus, is one where astronomers think there is a good chance of hidden ice that would be freed by the crash, describing the dirt there as "fluffy."

The crashes will also be a good show for the folks back home, which was always part of NASA's plan for the probe, Andrews said. The crashes will be broadcast live on NASA's Web site. The Hubble Space Telescope and other larger Earth telescopes will be trained at the moon. Observatories and museums are planning viewing parties in at least three countries.

It's the kind of mission - with a dramatic crash on a lunar landscape - that has kids and adults alike dreaming once again about the moon, reports CBS News correspondent Don Teague.

"I'd like to stand on the moon," said nine-year-old Anna Grace.

And amateur astronomy buffs with telescopes who live west of the Mississippi may try to catch a glimpse of it through their own instruments because it will still be dark outside. People who live in areas where it will be daylight won't be able to see it from home telescopes.

"A lot of telescopes will be tuning in," said Terry Mann, president of the Astronomical League, an umbrella group for local amateur astronomy societies. "You might see something you might not ever see again."

Amateurs need at least a 10-inch telescope to look at the crashes and what they see will only be a small part of their overall view in the scope. And they won't see the impact itself, but the spray of debris flying up.

This is all happening during a peak week in a yearlong celebrations commemorating the 400th anniversary of Galileo using a telescope to see Jupiter's moons. On Wednesday evening, the White House planned a star party for middle schoolers and about two dozen telescopes.

In Boulder, Colo., the Fiske Planetarium on Friday will serve free bagels and coffee to early rising moon crash spectators. The planetarium plans to stream a live video feed from NASA, train its own 24-inch telescope to watch the crash, and let people look for themselves through two research-grade telescopes.

"People like explosions one way or another," said Matt Benjamin, the planetarium's education programs manager. "And a celestial explosion is going to excite them."