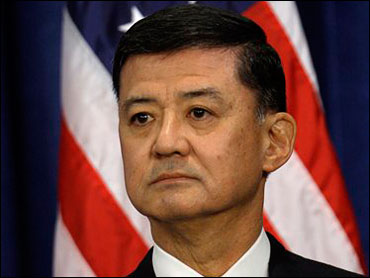 In his first appearance before Congress since becoming secretary, Shinseki also reiterated his promise to submit a "credible and adequate 2010 budget request" in the coming weeks that will be cost-effective while fully sensitive to veterans in need.

"Our veterans deserve and demand a Department of Veterans Affairs that remains relevant over time, that is responsive to their individual and changing needs, and that cares enough about them to undertake this challenging transformation. We care," Shinseki said in testimony prepared for a House Veterans Affairs Committee hearing Wednesday.

Shinseki, a former Army chief of staff, is taking over the government's second largest agency after it was criticized during the Bush administration of not doing enough to meet the growing needs of veterans. Thousands of veterans currently endure six-month waits for disability benefits, and the VA is scrambling to upgrade government technology systems before new legislation providing for millions of dollars in new GI benefits takes effect in August.

In recent weeks, the Government Accountability Office found that the VA was still lowballing budget estimates to Congress at the expense of tens of thousands of patients needing long-term health care. The VA also acknowledged at least nine cases of giving incorrect doses of drugs - mostly blood-thinning heparin - due to widespread computer glitches that it did not disclose to patients.

In his testimony, Shinseki said he would review the "fundamentals in every line of operation" to ensure that veterans receive "timely access to the highest quality of benefits and services."

"I intend to ... demand the highest levels of integrity, transparency and performance in leading the department through the fundamental and comprehensive change it must quickly undergo," Shinseki said. "There's a long tradition of VA providing leadership in medicine, of setting standards in many fields. Where we lead, we must continue. Where we do not, we must regain that leadership."