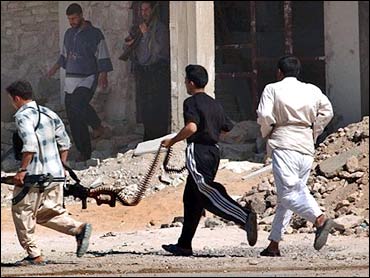 Gunmen killed a regional leader of one of Iraq's largest Shiite parties in a drive-by shooting south of Baghdad Wednesday in a slaying party officials blamed on Saddam Hussein loyalists.

Elsewhere, a roadside bomb exploded in a market north of Baghdad on Wednesday, killing at least six Iraqis and wounding nine. Hospital officials said the bombing occurred in Khan Bani Saad, about 6 miles south of Baqouba.

Gunmen drove up beside the car of Ali al-Khalisi, the head of Diyala province for the Supreme Council of the Islamic Revolution in Iraq, and opened fire in the town of Mahmoudiya, 25 miles south of Baghdad, Iraqi officials said.

Officials with the Shiite Muslim party blamed Saddam Hussein loyalists and insurgents for the assassination of al-Khalisi, the second SCIRI official killed recently. Abd el-Oun Hassan, the head of Shiite party's Musayyib office, was gunned down by militants last month.

"It must be terror gangs who try to halt the political process in this country," party spokesman Haitham al-Husseini said of al-Khalisi's killing. "Remnants of the former regime and extremists have set out to exterminate political figures who work for this country's interest."