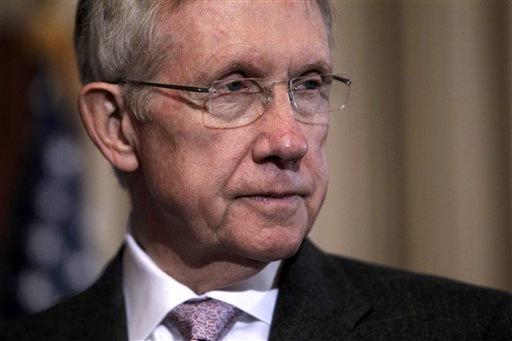 Senate Majority Leader Harry Reid's campaign is out with a new ad criticizing his Republican opponent in the Nevada Senate race, Sharron Angle, for advocating a phase-out of Social Security and Medicare.

Watch the spot at left. In it, a narrator says that Social Security means "independence" and "a secure income" - and that Angle "shockingly" wants to wipe the program out.

"She'd cut benefits for everyone coming into the system," the narrator says. "That's Sharron Angle."

The spot also touches on Angle's reported onetime support for "championing a program there that was developed by Scientology founder L. Ron Hubbard" that uses saunas and massages in prisons.

As Jon Ralston notes (via Politico's Ben Smith), Angle was on Fox News this morning, where she called the notion that she wants to get rid of Social Security "nonsense" despite her calls for it to be phased out. (She also claimed Reid "waterboarded" the economy.)

"I have always said we need to make the lockbox a lockbox, put the money in there for our senior citizens," she said. "They came here in good faith paying into a system and Harry Reid has put an IOU in for 24 years. He has been raiding Social Security. What we need to do is personalize Social Security so the government can no longer raid it."

Angle has previously called Social Security "a broken system without much to recommend it."

Reid is relatively unpopular in Nevada, with an approval rating hovering around just 40 percent; his electoral strategy is predicated in large part on convincing Nevada voters that while they may not love him, they don't really have a better option. By virtue of her controversial positions, Angle is believed to be the sort of candidate against whom Reid could successfully executive such a strategy and achieve an unlikely reelection victory.

The GOP, meanwhile, is trying to do to Reid what he is trying to do to Angle: Define him negatively in the minds of Nevada voters. The Republican group "American Crossroads" released an ad yesterday attacking Reid for suggesting the economic stimulus package is "paying off" despite continuing high unemployment and foreclosures. (Watch at left.)

It's part of a Republican push to cast Reid as a Washington dealmaker unconcerned with his constituents; the spot closes with a shot of him with President Obama and House Speaker Nancy Pelosi.

"Harry Reid's work is paying off all right - paying off for his friends in Washington," a narrator says. "But leaving Nevada with what?"

According to the Washington Post, American Crossroads says the ad will run for a week at a cost of $120,000.