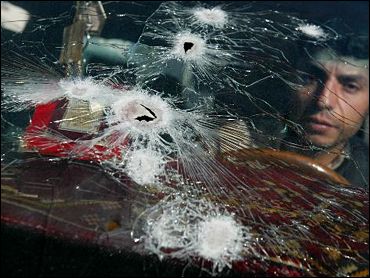 Prime Minister Ariel Sharon said he would seek Cabinet approval next week for a gradual Gaza withdrawal, and an Egyptian envoy headed to the West Bank on Monday with a message to Yasser Arafat not to sabotage a pullback.

Sharon is not assured of a majority in the Cabinet, and was meeting with hawkish ministers from his Likud Party on Monday to persuade them to back him.

Israel said it was looking for weapons smuggling tunnels.

"That doesn't give Israel the excuse to carry on its policies of collective punitive measures," said Palestinian legislator Hanan Ashrawi.

Israel says if the Palestinian population harbors terrorists, it will suffer.

Farmer Suleiman Taha, 45, said he grew carnations and vegetables and lost an investment of $55,000. "It's like a desert now," he said of his property.

So far, three tunnels have been found, the army said. The army had no comment on why the greenhouses and farmland were flattened.

Despite the Israeli withdrawal from Tel Sultan, there was no sign that the Israeli offensive is over.

The Egyptian intelligence chief, Omar Suleiman, was to arrive Monday for separate meetings with Arafat and Sharon.

Suleiman is to urge Arafat not to sabotage a Gaza withdrawal, according to a Palestinian official who spoke on condition of anonymity. Suleiman will tell Arafat that Egypt will help train Palestinian security forces that would be deployed in Gaza after an Israeli withdrawal, the official said.

In his talks with Sharon, Suleiman is expected to discuss new arrangements between Israel and Egypt after a Gaza pullback. The two countries need to review their border agreements and provide for the possible entry of Egyptian military advisers to Gaza, to help train Palestinian police, the official said.

Suleiman was also expected to bring up Israel's Rafah offensive.

The meetings reportedly were authorized by Sharon and encouraged by the Bush administration.

Dahlan, reports the Jerusalem Post, is perceived as the strongest leader in Gaza, the only one capable of controlling the various groups and enforcing law and order.

In the West Bank, troops briefly entered the city of Nablus, killing a 14-year-old Palestinian boy while dispersing stone throwers.

With international criticism of the Rafah raid intensifying, Israeli Justice Minister Yosef Lapid, a Holocaust survivor, said Sunday that Israel's offensive brought back memories of the suffering of his own family.

Though Lapid insisted he was not comparing the raid to the Holocaust, other ministers said the implication was obvious and harshly criticized the leader of the centrist Shinui Party. His outburst reflected growing discomfort over the operation.

The army says the offensive — the biggest in Gaza in years — is crucial for stopping weapons smuggling between Egypt and Gaza's Rafah refugee camp. With all other access to Gaza sealed, the tunnels are the only way to bring in weapons, including rockets the army says could hit Israeli cities.

In the raid, 41 Palestinians have been killed and dozens of homes destroyed.

Some critics said the campaign makes little sense from a military standpoint. Others questioned why Sharon approved it, even though he is pushing for an Israeli withdrawal from Gaza.

Sharon consulted ministers about a Gaza pullout before the weekly Cabinet session on Sunday. Likud rejected the plan on May 2, and Sharon is not assured of a majority in his Cabinet for the revised plan, which calls for a staged pullout from all of Gaza and four small West Bank settlements.

Speaking late Sunday, Sharon declared, "I intend to present the stages of my plan to the Cabinet in a week and get it approved."

The new plan calls for a gradual dismantling of settlements in stages. Each new stage would be subject to Cabinet approval. Sharon had intended to hand the settlements over to the Palestinians intact, but his critics said that was a reward for terrorism. Under the new plan, the vacated settlements will be destroyed.

Criticism of the Rafah sweep has focused on home demolitions, most along an Israeli military buffer zone between Egypt and the camp. Since the outbreak of fighting in 2000, more than 11,000 Palestinians have been displaced by house demolitions along the road, part of the military's attempt to widen it.

The army now says it wants to widen the road even further, to 300 yards along the six-mile route to make it harder to dig tunnels.

Military sources confirmed Sunday that the plan would require the demolition of some 700 to 2,000 Palestinian homes. Israel's attorney general has vetoed the idea, saying it would not hold up in local or international courts, and told the army to come up with a less destructive plan.

A growing chorus of commentators have raised questions in recent days, saying the objectives of the mission are unclear.

"What is more disturbing to a lot of people is not the dissent, but confusion over what the point of the whole thing is," said Mark Heller of the Jaffee Center for Strategic Studies at Tel Aviv University.

Also Monday, Israeli troops operated briefly in the West Bank city of Nablus and the nearby refugee camp of Balata. A 14-year-old Palestinian boy was killed by Israeli army fire, as troops shot at stone throwers, and a senior Palestinian fugitive was seriously wounded, hospital officials said.