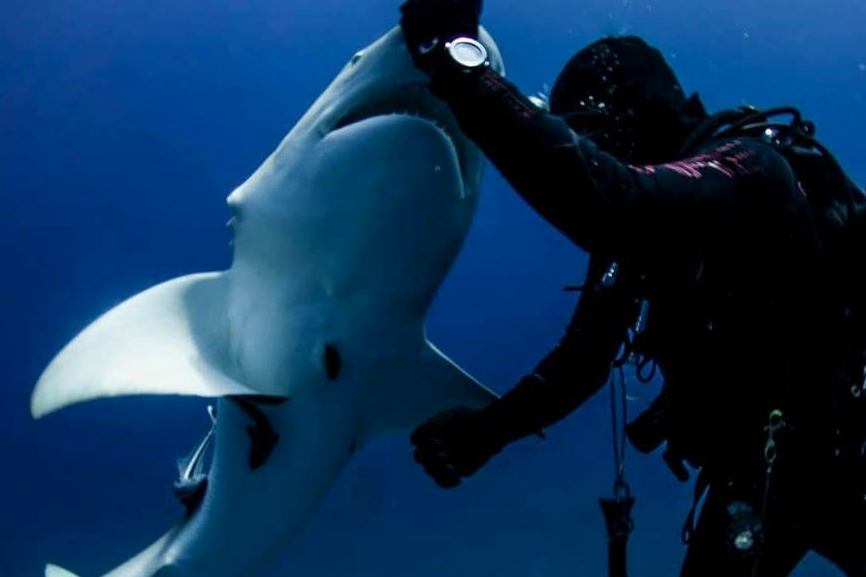 When Josh Eccles was taking a dive with his crew about four miles off the coast of Jupiter, Florida, a large lemon shark began circling him nonstop.

Eccles, who has been diving with sharks for more than five years now and takes dives three times a day up to seven days a week with Emerald Charters in Florida, knew something wasn’t right.

“This female shark kept constantly bumping into me,” Eccles told CBS News. “And when she would bump into me she would lift up her head, showing me her stomach.”

On the shark’s stomach, Eccles spotted a tiny little black dot. It looked like a parasite, maybe a growth. So the next time the shark swam by, Eccles swiped at it, and he felt something sharp.

Finally, the object, which turned out to be a large fish hook, worked its way out of the shark’s stomach. Eccles, who described himself as 6-foot-3-inches tall and 200 pounds, said the hook was nearly the size of his hand.

“It was the kind of thing she definitely wanted out,” he said. “As soon as I started messing with it, [the shark] was like ‘Get this out of me.’”

It looked like the shark had swallowed the hook about a year ago, Eccles estimates, and it finally worked its way out of her belly.

“I picked at it like a scab,” Eccles said.

“I am happy [the] story got out there, great for sharks!” Maddeford said.

As a diver, Eccles said it’s his job to bring awareness to sharks.

“Sharks are cool,” he said. “There’s a big reason why we do what we do. [Sharks] aren’t just man eaters.”

“Any shark with teeth can be aggressive,” he warned.

But if you have the training and you see a shark in need, it’s important to do what you can to help, Eccles said.