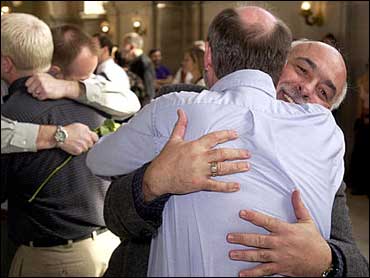 Dozens of same-sex couples lined up outside City Hall in heavy rain early Monday, waiting for city offices to open so they could join more than 1,700 other gay and lesbian couples who have exchanged vows in the past few days.

Despite miserable weather and the Presidents Day holiday, many couples camped out throughout the night. Though City Hall was scheduled to open at 10 a.m., City Assessor Mabel Teng said she would try to open her office earlier because of the demand.

Teng said many of the city workers who helped process the marriage licenses throughout the holiday weekend were volunteering their time.

"I am just very honored to be involved in this significant and history-making event," Teng said Monday morning. "I'm so proud to be part of it."

Since San Francisco officials began issuing marriage licenses to same-sex couples on Thursday, hundreds of gays and lesbians have wed — many rushing to California from across the country.

The Arizona-based Alliance Defense Fund sued to block the same-sex unions, and San Francisco Superior Court Judge James L. Warren has scheduled a hearing Tuesday in the case. A second legal challenge filed by a California group is also scheduled for a court hearing Tuesday. Briefs were due Monday.

More than 1,700 marriage licenses have been issued to same-sex couples since Thursday. Although some may choose to wait before actually getting married, hundreds have already gone before city officials to exchange vows and be declared "spouses for life," often in ceremonies scattered around the interior of the ornate City Hall.

New Mayor Gavin Newsom touched off the wedding spree by ordering officials to issue licenses to same-sex couples, declaring that he was merely ensuring equal treatment of gays and lesbians. Newsom later officiated personally at the weddings of his chief of staff and of his policy director, both of whom married their longtime partners.

Critics have pointed to a ballot initiative approved by California voters in 2000 that says the state will only recognize marriages between a man and woman. Randy Thomasson, the director of the Campaign for California Families, one of the groups challenging the marriages in court, said last week that Newsom "can't play God."

But the licenses may make it tougher for gay marriage opponents, who may now have to prove couples who sought and obtained a legal commitment for life broke the law, reports CBS News Correspondent Vince Gonzales.

On Sunday, a small group of protesters stood across the street from City Hall holding signs protesting same-sex unions.

But the critics seemed to make little difference to most of the people inside the building, where the mood was both busy and joyous. Many clerks and sheriff's deputies volunteered their time to work over the weekend.

Rich Walker and Brad Chilcoat, who have owned a home together in San Francisco for the past three and a half years, exchanged their vows at the top of City Hall's grand staircase and said later that the city's recognition of their union added special meaning.

"It's official. It's official," Walker said, displaying the marriage certificate stamped with both their names.

The certificate, Chilcoat said, "moves us from second-class citizens to equal status."

Walker, 50, and Chilcoat, 41, walked out of City Hall arm-in-arm, cheered by the crowds of people waiting outside.