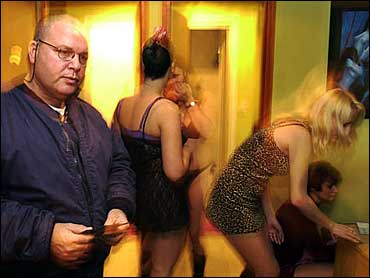 After a five-hour drive over the Egyptian desert, Inna crawled through a tunnel under a border fence, brushed sand off her pants and waited with seven other women to be taken to their new jobs.

Running from poverty in her homeland of Moldova, Inna had come to the Holy Land to enter a profession as old as the Bible — prostitution.

A $1 billion-a-year sex trade, reputedly one of the biggest of its kind in the world, has sprung up in Israel over the past decade. Every year, hundreds of women from eastern Europe and the former Soviet Union are smuggled into Israel.

The trafficking is linked to the Russian mafia taking root in Israel as a byproduct of mass immigration from the former Soviet Union. Many of the women are spirited in across Israel's border with Egypt, which runs along 200 miles of desert that is difficult to guard against smuggling.

The sex trade is so brisk that Israeli police set up a task force a year ago to deal with human trafficking. "This is seriously like slavery," said Chief Supt. Avi Davidovitch, head of the task force.

Offenders get off too lightly, a parliamentary committee says. Courts routinely sentence pimps to community service or short prison terms, the panel said in a report late last year. It called for minimum jail terms of 16 years.

Often, the women are mistreated, held as virtual prisoners and beaten by pimps, said Ephraim Ehrlich, an intelligence chief in the police Immigration Bureau.

"The people who work in this field have no conscience. All they care about is money," Ehrlich said. "These girls are really the victims."

Many women, 22-year-old Inna among them, are forced to work off their airfare and purchase fees.

Some are raped by Bedouin smugglers who get them across the border, Ehrlich said. Their passports are taken by their pimps and they are not allowed to go out alone from the brothels, which are generally apartments in seedy neighborhoods.

Using a fictitious name during an interview while being held at a police lockup, Inna said she was forced to see up to 15 clients a day. She said each client paid $30, with half going to her and half to her pimp.

Inna said she was depressed and ashamed and contracted venereal disease. "I couldn't get used to this — the men, the mentality, the treatment," she said.

She had arranged for a new passport from the Moldovan Embassy in Tel Aviv and bought a plane ticket home. Her pimp didn't object, she said, because she had paid off her "purchase price" and it is easy for him to bring in new women.

But before Inna could use her plane ticket, undercover police raided her brothel and arrested 12 women — 11 from Moldova and one from Ukraine.

All were taken to a holding facility in the central Israeli town of Hadera to await deportation. Inna and her colleagues refused to testify against their pimps, fearing both retribution from the pimps and the shame of having their families find out about their work.

During her six months in Israel, Inna said, she was able to send $3,500 to her mother and sister back in their Moldovan village. That's a small fortune in her poverty-stricken homeland, where she hopes to build a house and learn to be a hairdresser.

"After everything I saw here, I don't ever want to come back," she said.

Asked why she came, Inna said she was unemployed in Moldova and had come to Israel voluntarily after hearing of women making money as prostitutes.

"I wanted to do the same thing," she said, hooking purple-clad, thin legs behind her chair. "But it's too difficult to work with 10 to 15 men a day," she added, averting her large brown eyes.

A middleman in Moldova sent Inna to Moscow with eight other women. A day later, they flew to Egypt. After a day in Cairo, they were taken to Bedouin tribesmen in the desert. There, two men drove them at night to the Israeli border.

Carrying a small bag with underwear and a toothbrush, Inna crawled through a narrow tunnel dug under the border fence, and arrived in Israel sandy, tired and already homesick. Minutes later, two Israeli Bedouins arrived in jeeps and drove them to an apartment.

"Then the pimps came and began to buy us, one by one, and each of us was taken someplace else," Inna said.

Inna said she did not know how much her pimp paid for her — although the price can range from $3,000 to $10,000. She said for the first month, she was paid only $4 per customer because she had to pay off her debt to the pimp.

At a police station in Rehovot, south of Tel Aviv, two other Moldovan women talked tearfully with reporters about their lives as prostitutes.

One, identified only as Marina, a slightly built 21-year-old, buried her face in her hands when she revealed that two days earlier she had learned she was pregnant. Police said that at her request, she would undergo an abortion before both women were sent home.

The area police commander, Rafi Peled, said about 25 women had been arrested and deported after a phone call from Marina led to a major prostitution ring.

"We have cut off a big branch of the tree of trafficking in women," he said. "We have not yet uprooted the trunk."