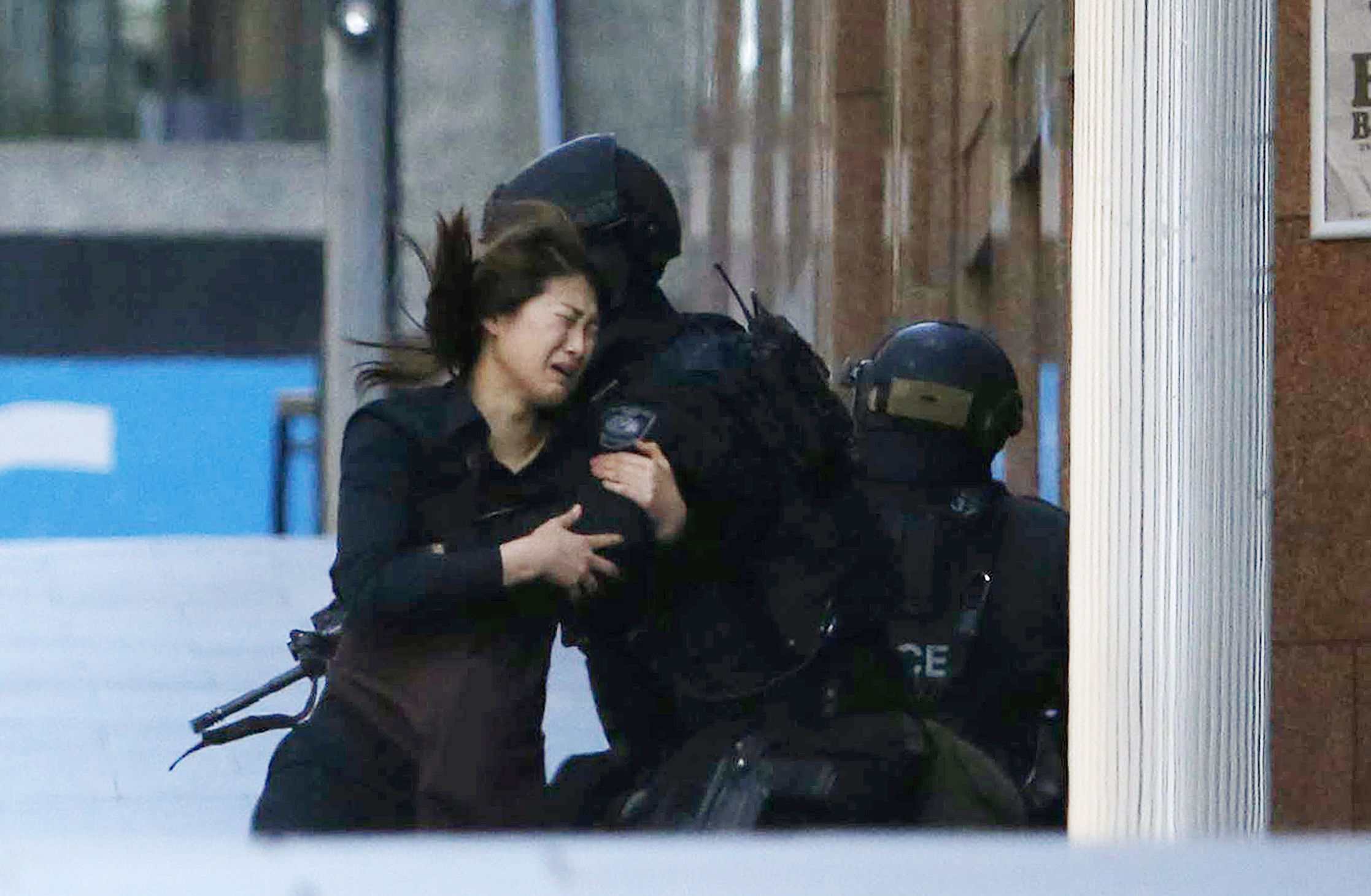 SYDNEY -- Five people fled a Sydney cafe Monday where a gunman was still holding an unknown number of hostages. Two people inside the cafe were earlier seen holding up a flag containing an Islamic declaration of faith.

The development came six hours after the hostage crisis began, when three men were seen running from a fire exit of the Lindt Chocolat Cafe in downtown Sydney.

Shortly afterward, two women, one after another, sprinted from the cafe and into the arms of heavily armed police. Both were wearing aprons with the Lindt chocolate logo, indicating they were cafe employees.

It was unclear whether the five had escaped or been released.

"We do not have any information that suggests that anybody is harmed at this stage," New South Wales Police Deputy Commissioner Catherine Burn said, after the first three hostages had emerged.

"The first thing that we are doing is making sure that they are OK. We will then establish who they are and then we will continue to work with them."

She said police negotiators had made contact with the gunman. The suspect was identified by police as local Muslim cleric Man Haron Monis. Monis is an Iranian refugee who has long espoused extremist views in Australia. He was once convicted of sexual assault and was known, according to the Reuters news agency, for sending hate messages to the families of Australian troops killed in battle.

CBS News partner Ten Eyewitness News reports it spoke directly to two hostages inside the cafe, who confirmed two demands from the gunman: He wants an ISIS flag delivered to the cafe, and wants to speak to the Prime Minster Tony Abbott.

According to one of the purported hostages, the gunman was demanding the ISIS flag, a "live" conversation with Abbott, and that his message of allegiance to ISIS be broadcast nationally.

The first three people who emerged from the cafe were seen on live video footage bolting out of the door past heavily armed police and then disappearing around a corner.

New South Wales state Police Commissioner Andrew Scipione said police did not know the gunman's motivation and were not sure how many people were being held inside.

"We have not yet confirmed it is a terrorism-related event," Scipione said. "We're dealing with a hostage situation with an armed offender and we are dealing with it accordingly."

"We don't know whether this is politically motivated, although obviously there are some indications that it could be," Prime Minister Abbott told reporters in the nation's capital, Canberra. "We have to appreciate that even in a society such as ours, there are people who would wish to do us harm."

Australia has been a vocal backer of the U.S. campaign against ISIS, which has raised fears of reprisal attacks everywhere.

Hundreds of police flooded into the area, streets were closed and offices evacuated. The public was told to stay away from Martin Place, home to the state premier's office, the Reserve Bank of Australia, and the headquarters of two of the nation's largest banks. The state parliament house is a few blocks away. The U.S. consulate is also nearby.

"We have advised U.S. citizens and others avoid the area around Martin Place until further notice," U.S. State Department spokeswoman Jen Psaki said in a written statement. "The U.S. Consulate General in Sydney has been evacuated, along with other buildings in the vicinity of Martin Place, as a security precaution. A small group of Consulate staff continues to work from a secure location."

Television footage shot through the cafe's windows showed several people with their arms in the air and hands pressed against the glass, and two people holding up a black flag with the Shahada, or Islamic declaration of faith, written on it.

The Shahada translates as "There is no God but Allah and Muhammad is His messenger." It is considered the first of Islam's five pillars of faith, and is similar to the Lord's Prayer in Christianity. It is pervasive throughout Islamic culture, including the green flag of Saudi Arabia. Jihadis have expropriated the Shahada in their own black flag.

Heavily armed officers were lined up outside the cafe, and a man with a backpack inside the cafe could be seen walking back and forth in front of the glass doors.

"Police have been in attendance and have controlled the situation from very early this morning," said Scipione, the police commissioner. "We are at this stage continuing to secure and make sure that we are doing all we can to bring this to a peaceful outcome."

Abbott said the National Security Committee of Cabinet met to be briefed on the situation.

"The whole point of politically motivated violence is to scare people out of being themselves," Abbott said. "Australia is a peaceful, open and generous society - nothing should ever change that. And that's why I would urge all Australians today to go about their business as usual."