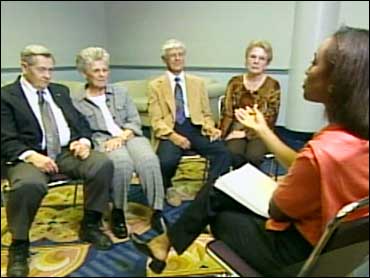 There was a time when technophobia stopped many seniors from using the Internet. But that's changing. Today seniors are logging on and proving that you're never too old to look for love, reports The Early Show correspondent Debbye Turner.

Chet Bayliss was 75 when his son talked him into signing up with Match.com, an online dating service.

"I was at a point where I thought, 'Well, I'm not going to find that person.' And I was getting a little sad at that time, because the years go by and I didn't want to be alone," he says. "I thought I'm going to go for it. I'd rather do that than go to a bar."

Jan was in her mid-60s when she posted her profile.

"Well, first of all, I felt that the time was right for me. I was in the mood to meet someone and be serious," she says. "I think you have to be kind of adventurous though, but that's me. I included that I like music and I play the piano."

Her bio attracted Chet's attention one night. "I said, 'Boy, that's interesting. She's interested in the same things I am.' So I emailed her."

Chet and Jan started dating last May, and by August they were walking down the aisle together.

"It was just something that, really, there was a connection. And I can't describe it. But it's a wonderful thing to have happen to you," says Chet.

But they're not the only seniors willing to try a new approach to solving an old problem.

Seniors are the fastest growing segment of Internet users, and more and more of them are using the Internet to look for love. In fact, 16 percent of all those active on the top five Internet dating sites are 55 or older.

And now there's some new sites, such as SilverSingles.com and SeniorsCircle.com, which cater specifically to seniors.

At this year's AARP convention in Las Vegas, eHarmony.com, an Internet dating service, was in attendance, courting seniors.

Dr. Yale Warren, the founder of eHarmony, says his site vigorously screens applicants, but admits that some seniors still have concerns.

"We're very interested in working with senior people. Eventually, you're going to see seniors playing a larger and larger role in services like ours," he says. "I think seniors do think that the Internet is a little bit of a tricky place because people could be appearing to be something that they're not."

On the other hand, some find it easier to really get to know someone.

"On the Internet, I could find myself asking a lot more in-depth questions and I could express myself so that they really got to know me better," says Ben Hood.

Mary Lou, who met Ben online and married him, said, "You're not going to be going to the disco. Church membership doesn't change very much, and you go, 'Let me see what else is out there.'"