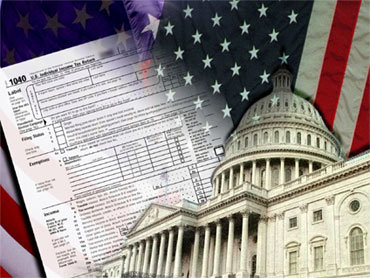 The Senate, which blocked a Democratic tax cut plan less than two weeks ago, will get their first chance Monday to vote on the tax-cut deal struck by President Barack Obama and Republicans.

If a compromise package doesn't pass, tax rates will rise for nearly all Americans come January 1 - something lawmakers from both parties desperately want to avoid. The package also would renew a program of jobless benefits for the long-term unemployed, and put in place a one-year cut in Social Security payroll taxes.

That is, if they can get to the Capitol to vote: Midwestern lawmakers may have difficulty getting back from their home states owing to the major snowstorm that has grounded more than 1,000 flights.

But whatever the outcome of the test vote, the White House expects the bill to pass by year's end.

Axelrod told host Bob Schieffer. "All economists who have looked at this have said this will put a real charge into the economy."

The White House is expressing optimism, even though the Democratically-controlled House refused to bring the measure up for a vote in protest, reports CBS News congressional correspondent Nancy Cordes.

"Everybody understands what it would mean for the economy if we don't get this done," Axelrod said Sunday.

"We believe that when it comes back to the House, that we will get a vote, and that we'll prevail there, because at the end of the day, no one wants to see taxes go up on 150 million Americans ... No one wants to see 2 million people lose their unemployment insurance."

While many House Democrats have criticized the tax deal, Axelrod said he didn't foresee "major changes" being made by the House.

At the insistence of Republicans, the plan includes a more generous estate tax provision: The first $5 million of a couple's estate could pass to heirs without taxation, and an additional $5 million for the spouse. The balance would be subject to a 35 percent tax rate.

That provision infuriated Democrats who are already unhappy with Mr. Obama for agreeing to extend the Bush-era tax cuts for incomes of more than $200,000 for individuals and $250,000 for couples, and who say the tax breaks will unnecessarily add to the rising federal deficit.

In all, the package would cost about $855 billion, according to a preliminary congressional estimate.

The No. 2 Senate Democrat, Dick Durbin of Illinois, said a "good cross-section" of senators in his party are ready to accept the deal.

But the Independent Senator from Vermont, Bernie Sanders, spent 8 and 1/2 hours railing against it on the Senate floor on Friday.

"It's Robin Hood in reverse," he said.

Behind closed doors, Democrats who are firmly against provisions (like the reduction in the estate tax rate) are getting sweeteners added.

Among the additions: A tax credit for renewable energy and green jobs; tax relief for mass transit; a tax deduction for elementary and secondary school teachers; and tax benefits to landowners who set aside their property for conservation.

Not all Democrats are on board with the add-ons.

On "Face the Nation" yesterday, Rep. Jerrold Nadler, D-N.Y., said the cost of extending the Bush tax cuts for the highest income levels and raising income exempt from the estate tax "really sacrifices the welfare of the country long-term."

Maryland Rep. Chris Van Hollen, a member of the Democratic leadership who represented the House in negotiations with the administration, made clear that Democrats strongly object to extending breaks to estates as large as $5 million. He said the package will be taken up in the House in some form, but there would be an effort to change the estate tax provision.

But, Cordes said, even the most vocal Democratic critics say they won't scuttle the deal over the estate tax issue.