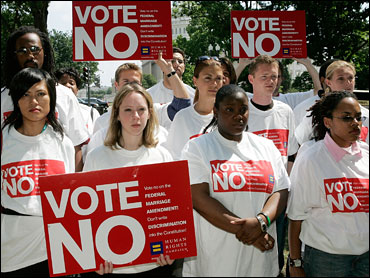 The Senate on Wednesday rejected a constitutional amendment to ban gay marriage, dealing a defeat to President Bush and Republicans who hoped to use the measure to energize conservative voters on Election Day.

Supporters knew they wouldn't achieve the two-thirds vote needed to approve a constitutional amendment, but they had predicted a majority of votes. Instead, they fell one short, 49-48.

That was one vote more than they got last time the Senate voted on the matter, in 2004.

"We were hoping to get over 50 percent, but that didn't happen today," said Sen. David Vitter, R-La., one of the amendment's supporters. "Eventually, Congress is going to have to catch up to the wisdom of the American people or the American people will change Congress for the better."

"We're not going to stop until marriage between a man and a woman is
protected," said Sen. Sam Brownback, R-Kan.

President Bush said he was disappointed by the vote, but it often takes time to amend the Constitution.

"Our nation's founders set a high bar for amending our Constitution and history has shown us that it can take several tries before an amendment builds the two-thirds support it needs in both houses of Congress," the president said in a statement.

While there is no chance for this constitutional amendment to move forward, that won't stop House Republicans from holding their own debate and vote on the measure next month, CBS News correspondent Bob Fuss reports.

Supporters lost three key "yes" votes. Two Republicans changed their votes from yes in 2004 to no this time: Sens. Judd Gregg of New Hampshire and Arlen Specter of Pennsylvania. The third was Sen. Chuck Hagel, R-Neb., who did not vote this time because he was traveling with Bush.

All told, seven Republicans voted to kill the amendment. The four others were Sens. Lincoln Chafee of Rhode Island, Susan Collins of Maine, John McCain of Arizona, Olympia Snowe of Maine and John Sununu of New Hampshire.

Gregg said that in 2004, he believed the Massachusetts Supreme Court decision legalizing same-sex marriage in that state would undermine the prerogatives of other states, like his, to prohibit such unions.

"Fortunately, such legal pandemonium has not ensued. The past two years have shown that federalism, not more federal laws, is a viable and preferable approach," Gregg said in a statement.

"Most Americans are not yet convinced that their elected representatives or the judiciary are likely to expand decisively the definition of marriage to include same-sex couples," said Sen. John McCain, R-Ariz., a possible presidential candidate in 2008. He told the Senate on Tuesday he does not support the amendment.

The tally Wednesday put the ban 18 votes short of the 67 needed for the Senate to approve a constitutional amendment.

Republicans had hoped for a better showing given their four-seat gain in the Senate after the 2004 election, with supporters predicting more than 50 votes in favor of sending the measure for an up-or-down vote, called cloture.

Sen. Wayne Allard, R-Colo., acknowledged supporters of the amendment never were sure how the votes would fall Wednesday.

"We have never really, I don't think, got a real hard grip on the cloture vote," Allard told reporters. "Since the last election we had, we figured we would know where everybody was."

But the defeat is by no means the amendment's last stand, said its supporters.

"I do not believe the sponsors are going to fall back and cry about it," said Sen. Orrin Hatch, R-Utah. "I think they are going to keep bringing it up."

The defeat came despite daily appeals for passage from Mr. Bush, whose standing is troubled by sagging poll numbers and a dissatisfied conservative base.

The Vatican also added muscle to the argument Tuesday, naming gay marriage as one of the factors threatening the traditional family as never before.

Democrats said the debate was a divisive political ploy.

"The Republican leadership is asking us to spend time writing bigotry into the Constitution," said Sen. Edward Kennedy of Massachusetts, which legalized gay marriage in 2003. "A vote for it is a vote against civil unions, against domestic partnership, against all other efforts for states to treat gays and lesbians fairly under the law."

In response, Hatch fumed: "Does he really want to suggest that over half of the United States Senate is a crew of bigots?"

Forty-five of the 50 states have acted to define traditional marriage in ways that would ban same-sex marriage — 19 with constitutional amendments and 26 with statutes.

The amendment would prohibit states from recognizing same-sex marriages. To become ratified, it would need two-thirds support in the Senate and House, and then would have to be ratified by at least 38 state legislatures.

Ben Nelson of Nebraska, the only Democratic senator who supports the amendment, voted "yes." The only other Democrat to vote in favor of moving forward with an up-or-down vote Wednesday, Robert Byrd of West Virginia, opposes the amendment itself.

Three senators did not vote: Democrats Christopher Dodd of Connecticut and John Rockefeller of West Virginia, and Republican Chuck Hagel of Nebraska.