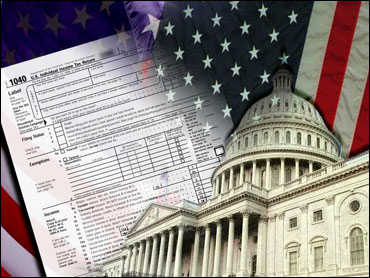 A plan to temporarily erase taxes on corporate dividends cleared the Senate by the slimmest of margins, buoying President Bush's hopes for the keystone of his proposal to juice the economy despite its white-knuckle trip through Congress.

By a 51-49 vote late Thursday, the Senate approved a bill cutting individual income taxes and some business levies by $350 billion through 2013. Before passage, senators voted to slice the dividend tax in half this year, then suspend it completely for three years. That roll call was 51-50, with Vice President Dick Cheney arriving to cast the tie-breaking vote.

Senate passage sets the stage for what could be a very contentious and difficult negotiation with the House, CBS News Correspondent Bob Fuss reports, during which the White House will try to re-write both bills closer to what the president wants. House speaker Dennis Hastert has already criticized the Senate idea of phasing out the tax on dividends only to bring it back after three years and there is a very large dollar difference between the two packages.

Overall, the measure would cut taxes by nearly $420 billion — and provide $20 billion in spending for Medicaid and other programs for financially ailing states, while raising other levies and fees by almost $90 billion.

The bulk of the bill moves up cuts in income tax rates passed by Congress two years ago, increases the child tax credit to $1,000 and gives married couples a tax break. It also lets small businesses expense more of their equipment investments.

President Bush praised the Senate "for its bipartisan passage of a jobs and growth package that includes all of the components of my original plan."

"Jobs are on the line, and I look forward to working with the full Congress to pass a robust economic growth plan," Bush said in a statement after the Senate vote. "I call on Congress to resolve their differences quickly so I can sign a bill that will help create jobs, boost take home pay and spur economic growth."

Bush sought the complete elimination of the levies stockholders pay on dividends, a $396 billion plan that was the heart of his $726 billion tax-cutting proposal. But GOP moderates nervous about burgeoning federal deficits forced Republican leaders in both chambers to shrink the overall tax cut, and the fate of the dividend reduction was often in doubt.

Sens. Ben Nelson of Nebraska and Zell Miller of Georgia were the only Democrats to vote for the dividend plan, which was authored by Senate Budget Committee Chairman Don Nickles, R-Okla. Sens. John McCain of Arizona, Lincoln Chafee of Rhode Island and Olympia Snowe of Maine were the only Republicans opposed.

Democrats said the proposal would help mostly the rich and swell budget deficits, and said the tax bill's price tag was artificially low because Republicans would never really let the dividend tax come back.

"This is absurd. This is irresponsible," said Sen. Max Baucus of Montana, top Democrat on the tax-writing Senate Finance Committee.

The price tag on the dividend plan was $124 billion. A study by the liberal-leaning Center on Budget and Policy Priorities said if the dividend tax were erased permanently, the overall Senate bill would cost $660 billion over the decade.

The vote on final passage was identical to the vote on the dividend amendment except that Sen. Evan Bayh, D-Ind., also voted yes. In a written statement, he said he supported it to take strong action to spur the economy, but would oppose a final House-Senate compromise if it contained the same budget gimmicks or grows larger.

Snowe and Sen. George Voinovich, R-Ohio, had pressured Senate GOP leaders to limit the tax measure to $350 billion. But with support from three Democrats, Snowe's vote was not needed at the end.

"This is a risky, highly speculative and ill-conceived approach," Snowe said of the dividend language.

The House completed a $550 billion tax bill last week that would lower the current maximum tax rates on dividends and capital gains to 15 percent. Those top rates are now 38.6 percent and 20 percent, respectively, and House leaders indicated they prefer their approach.

"If the dividend is 50 percent and then nothing, and all of a sudden it is back to 100 percent or whatever it is, my feeling is that it does not solve the problem," said House Speaker Dennis Hastert, R-Ill.

Even so, one administration official speaking on condition of anonymity said the White House was hoping the Senate version completely suspending the dividend tax would survive. It was becoming less likely, however, that the House and Senate would complete a final compromise by the time Congress begins its Memorial Day recess next Friday.

In more than 12 hours of voting Thursday, senators cast roll call votes on 29 amendments, rejecting nearly every one.

They approved one by Finance Committee Chairman Charles Grassley, R-Iowa, giving rural states more Medicare money. They passed another by John Ensign, R-Nev., cutting taxes on business profits earned abroad and brought back to the United States to 5 percent from 35 percent for one year.