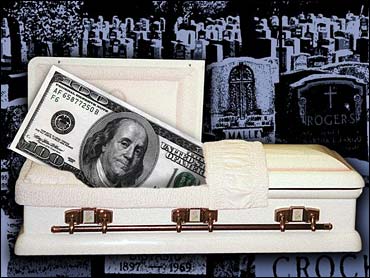 GOP leaders hoped to deliver this election year tax cut for business owners and others who pass on big estates, reports CBS News correspondent Bob Fuss, but Democrats blocked it, complaining it's a waste of money when the country is at war and in debt.

A 57-41 vote fell three votes short of advancing the bill.

The estate tax is currently paid only by those who inherit more than $2 million, a miniscule portion of the American people. But opponents say it's an unfair tax that prevents owners of businesses and large farms from handing them down to their children.

Knowing they lacked the votes to eliminate the tax, a small group of senators had hoped to keep the issue alive with an agreement to lift the tax from smaller estates and lessen the hit on larger ones.

Frist gave the negotiators a lift by agreeing to give such a compromise a vote. That didn't give the tax's strongest critics enough votes to maneuver the issue around Democratic opponents, however.

"The estate tax is an extremely costly tax for a wealthy few that comes at the expense of every other American born and yet to be born for decades to come," said Senate Minority Leader Harry Reid, D-Nev.

Frist would still like to deliver a bill to the president reducing the estate tax this summer, before a midterm election where control of Congress is at stake.

Sen. Trent Lott, R-Miss., said he expected the estate tax to find its way into an unrelated bill headed for the president's desk sometime this year.

Under current law this year, the first $2 million of a person's estate or $4 million of a couple's, escapes taxation. The remainder can be taxed at rates up to 46 percent.

According to the most recent statistics available from the Internal Revenue Service, 1.17 percent of people who died in 2002 left a taxable estate.

Sen. Jon Kyl, R-Ariz., had been brokering a compromise among Republicans and Democrats interested in paring down the tax and rewriting the quirky law that kills and resurrects the tax.

He proposed exempting the first $5 million of an individual's estate, or $10 million of a couple's, from taxation. The size of estates escaping the tax would increase each year to keep pace with inflation.

"That is a fair way to help the people at the lower end of the spectrum and yet collect the revenue from those very, very wealthy estates that we all agree can pay part of this estate tax," Kyl said.

That effort attracted some of the senators who had been wary of repealing the tax but agreeable to shrinking its impact on heirs, but it did not attract enough Democrats who had expressed interest in negotiating a deal.

"Repealing the estate tax during this time of fiscal crisis would be incredibly irresponsible and intellectually dishonest," Voinovich said.