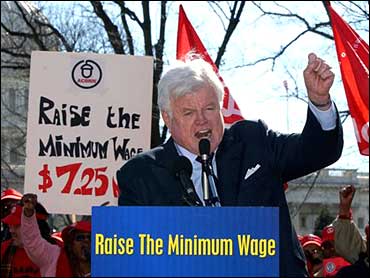 The Senate defeated dueling proposals Monday to raise the $5.15-an-hour minimum wage — one backed by organized labor, the other salted with pro-business provisions — in a day of skirmishing that reflected Republican gains in last fall's elections.

Both plans fell well short of the 60 votes needed to advance, and signaled that prospects for raising the federal wage floor, unchanged since 1996, are remote during the current two-year Congress.

"I believe that anyone who works 40 hours a week, 52 weeks a year should not live in poverty in the richest country in the world," said Sen. Edward M. Kennedy, D-Mass., arguing for the Democratic proposal to increase the minimum wage by $2.10 over the next 26 months.

Republicans countered with a smaller increase, $1.10 in two steps over 18 months, they said would help workers without hampering the creation of jobs needed to help those with low skills. "Wages do not cause sales. Sales are needed to provide wages. Wages do not cause revenue. Revenue drives wages," said Sen. Mike Enzi, R-Wyo.

CBS News Radio Correspondent Bob Fuss reports that neither plan had strong enough backing to pass. The Democratic amendment was defeated, 49-46. The GOP alternative fell by a wider margin, 61-38.

While the outcome was never in doubt, Democrats said in advance they hoped to use the issue to increases chances for passage of state minimum wage initiatives in 2006, as well as to highlight differences with Republicans who will be on the ballot next year.

Kennedy accused Republicans of advancing a "deeper poverty agenda" for the poor by including several provisions to cut long-standing wage and overtime protections for millions of Americans. He took particular aim at Sen. Rick Santorum, R-Pa., a conservative who is atop the Democratic target list for 2006 and the lead supporter of the GOP minimum wage alternative.

"The senator from Pennsylvania has a record of opposing increases in the minimum wage," Kennedy said. "He has voted against it at least 17 times in the last 10 years."

"I have not had any ideological problem with the minimum wage, " Santorum responded, adding he voted for the last increase to clear Congress, in 1996. He said the other elements of the GOP plan were designed to help small businesses and give workers more flexibility in their work schedule, and not, as Kennedy said, weaken their rights.

Democrats sought minimum wage increases in three steps of 70 cents each, to $7.25. Republicans countered with raises in two steps of 55 cents apiece, to $6.25, as well as several pro-business provisions.

These include an option for employees to work up to 80 hours over two weeks without qualifying for overtime pay; a provision restricting the ability of states to raise the minimum wage for restaurant employees; and waiving wage and overtime rules for workers in some small businesses now covered.

The clash unfolded as part of a debate over business-backed legislation to overhaul the nation's bankruptcy laws.

The overall measure enjoys bipartisan support, although no vote on passage will occur until the Senate settled the minimum wage dispute and resolved companion controversy over allowing protesters at abortion clinics to avoid paying court fines by entering bankruptcy.

Republican aides, speaking on condition of anonymity, said they had the votes to prevail on that showdown, as well, and send the measure to the House. Democratic aides did not dispute that, although some held open the possibility that they would seek to delay final passage of the bankruptcy bill past the end of the week. These aides spoke on condition of anonymity, saying they did not want to predict the outcome publicly.

Democrats conceded in advance they were certain to lose the minimum wage vote, particularly given the Republicans' four-seat gain in last fall's elections.

At the same time, they said they hoped to raise the issue to increases chances for passage of state minimum wage initiatives in 2006, as well as to highlight differences with Republicans who will be on the ballot next year.

Santorum was chief among them, the third-ranking member of the GOP leadership and an outspoken conservative. Democrats and Republicans alike said his decision to be the public spokesman for the Republican alternative reflected the potential significance of the issue.

At the same time, the Republicans' decision to allow a vote reflected their confidence that they could prevail. The GOP majority maneuvered successfully in the past two years to block votes on the issue, when Democrats might have won.

"When you raise the minimum wage you are pricing some workers out of the market," said Sen. John Sununu, R-N.H. "It is an economic fact, and the proponents of raising the minimum wage like to dismiss this by saying we have a hard time measuring it and the economy is large."

Countered Sen. Tom Harkin, D-Iowa: "This is a values issue. This is at the heart of what kind of country we want."

While Democrats sought only an increase in the minimum wage with their proposal, Republicans expanded theirs to include business regulatory relief as well as tax breaks totaling $4.2 billion, most of it directed toward the restaurant industry.