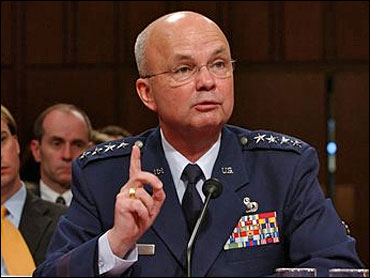 After hearing assurances he will be independent of the Pentagon, the Senate on Friday easily confirmed Gen. Michael Hayden, a career Air Force man, to head the CIA.

Hayden, 61, would be the first active-duty or retired military officer to run the spy agency in 25 years. He was approved by a vote of 78-15.

President Bush, in a written statement, commended the Senate for confirming Hayden.

"Winning the war on terror requires that America have the best intelligence possible, and his strong leadership will ensure that we do," he said. "Gen. Hayden is a patriot and a dedicated public servant whose broad experience, dedication and expertise make him the right person to lead the CIA at this critical time."

Kempthorne's confirmation was never in doubt. A former senator, Kempthorne, 54, was confirmed on a voice vote to succeed Gale Norton as the steward of one-fifth of the nation's land – including tourist magnets as diverse as Yellowstone National Park and the Civil War battlefield at Gettysburg, Pa.

At his confirmation hearing, Hayden sought to assure lawmakers he would be independent from his military superiors but said he would consider how his uniform affects his relationship with CIA personnel. If it were to get in the way, he said, "I'll make the right decision."

Hayden, who headed the National Security Agency for several years, became a lightning rod for the debate about the Bush administration's domestic eavesdropping program. Some Democrats and civil-liberties advocates argue the monitoring was illegal.

As head of the NSA from 1999 to 2005, Hayden oversaw the program. His defenders say he was relying on the advice of top government lawyers.

The White House hurried Hayden's nomination through in only 17 days, in part by heeding Congress' 5-month-old requests for more information on the classified operations.

Senate Intelligence Committee Chairman Pat Roberts, R-Kan., countered that Hayden "is eminently qualified" to lead the agency and that "he is the right choice to lead the CIA."