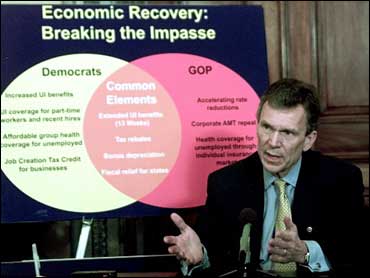 The U.S. Senate dealt a final blow Wednesday to President Bush's economic stimulus plan after Democrats and Republicans failed to muster the votes needed to pass their competing packages.

In two votes, the Senate showed that neither the House-passed Republican plan backed by Mr. Bush, nor the Democratic plan could muster the votes needed to overcome Senate procedural hurdles. The Democrats have 50 seats in the Senate, with the Republicans holding 49, and one independent.

The Senate did approve an extension of jobless benefits.

The vote was 56-39 on legislation introduced by Senate Majority Leader Tom Daschle, S.D., which fell four votes short of the 60 needed to prevail under Senate rules. The Daschle bill would have provided $69 billion in stimulus this year.

The Senate then voted 48-47, again short of the 60-vote threshold, to block a House-passed $89 billion stimulus bill backed by the president. Daschle then pulled the issue from the Senate floor.

Pence heckled at conservative conference in Florida
By unanimous voice vote, the Senate approved a measure by Daschle for a simple 13-week extension of jobless benefits for the unemployed, which are now limited to 26 weeks. White House spokesman Ari Fleischer, voicing frustration over failure of the stimulus bill, said that $8 billion aid extension is "the least they should do." That aid extension now goes to the House.

Daschle blamed the demise of the stimulus bill on Republicans for insisting on attaching major tax cuts with little bearing on the immediate recession, such as amendments ensuring that the estate tax repeal stays in place and making all of the 10-year, $1.35 trillion tax cut permanent. Both wouldn't take effect until the next decade.

"Frankly, it has nothing to do with the recession of 2002," Daschle said before the vote.

Republicans in turn condemned Daschle's decsion to move on to other business. Minority Leader Trent Lott, R-Miss., said the failure to act is "sending a very dangerous and reckless message to an uncertain economy."

Mr. Bush expressed his regrets Tuesday at the apparent defeat of the stimulus package, which he has been pushing since October to boost an economy that began a downturn in March and was rocked again by the Sept. 11 terror attacks.

"I'm just disappointed," Mr. Bush told reporters as he returned from a trip to Pittsburgh. "I think we need a good stimulus package."

Many economists, including Federal Reserve Chairman Alan Greenspan, say a stimulus bill is less critical now that the recession appears to be ending.

Republicans and Democrats were unable to compromise on the level of tax relief in the package, particularly an acceleration of individual income tax cuts, and how best to deliver aid to the unemployed. The GOP-led House passed two different measures last year, but neither could clear the 60-vote threshold necessary to pass a Senate divided between 50 Democrats, 49 Republicans and an independent.

Daschle, who was labeled an "obstructionist" by Republicans because of the stimulus deadlock, suggested in January that the Senate pass a bare-bones stimulus bill composed of the most popular items. Republicans derided the Democratic bill as virtually stimulus-free and argued for deeper tax cuts to spur growth.

"If in fact the Senate, under its current leadership, can do nothing good, we are better off with them doing nothing at all," said House Majority Leader Dick Armey, R-Texas.

Click here for a closer look at the Bush presidency.

Democrats, however, said Republicans were trying to showcase their tax-cut priorities for voters in an election year, knowing they would not become law.

"It was tied in with their tax breaks that are not justified," said Rep. Gerald Kleczka, D-Wis.

Some Republicans had begun to question whether money earmarked for the stimulus bill might not be better used to balance the federal government's budget. A group of 70 House conservatives is pushing for that goal if no stimulus bill is passed.

"If we can't pass a solid economic stimulus bill, we should balance the budget this year," said Rep. Pat Toomey, R-Pa.

Other lawmakers expressed frustration that election-year politics already were dominating the congressional agenda. Voters will think "we're too busy down here trying to figure out who's going to control the U.S. Senate" to address crucial issues, said Sen. George Voinovich, R-Ohio.

The Bush administration supports a package that would provide $89 billion in stimulus in 2002 and $73 billion in 2003. It would ccelerate income tax cuts now set to take effect in the future and provide a new round of rebate checks of up to $600 aimed at lower-income Americans.