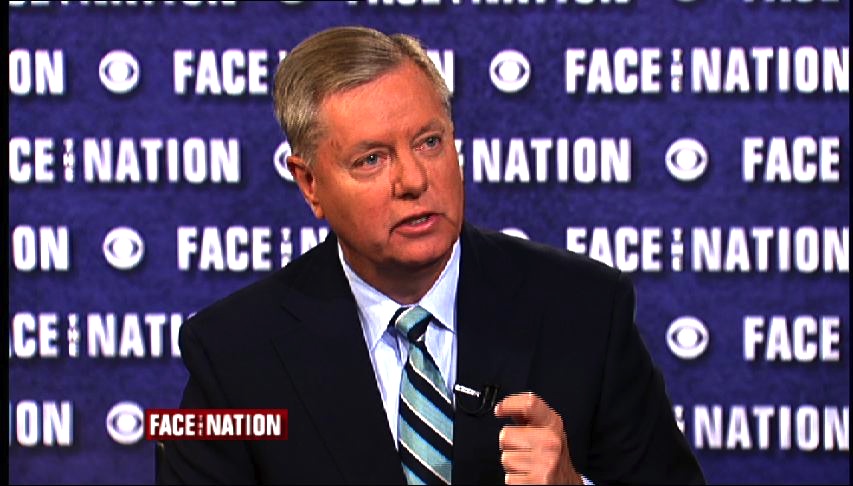 Sen. Lindsey Graham, R-S.C., warned that the next 9/11 attack could emanate from Iraq and Syria if the U.S. does not take steps to immediately halt the advance of the Islamic militants sweeping toward the Iraqi capital of Baghdad.

"We need air power immediately to stop the advance toward Baghdad," Graham said on CBS' "Face the Nation" Sunday, warning that the Islamic State of Iraq and Syria (ISIS) - the jihadists who are an offshoot of al Qaeda - could control the entire northern half of the country and use it to march on Jordan and Lebanon while Iran moves in to control the south.

The South Carolina senator added that the director of national intelligence and the head of the FBI have both warned that ISIS, also known as the Islamic State of Iraq and the Levant, or ISIL, has promised to carry out the next 9/11 attacks.

"I think it's inevitable. The seeds of 9/11 are being planted all over Iraq and Syria. You don't have to believe me, this is what they're telling you they're gonna do. They're not hiding their agenda. They want an Islamic caliphate," Graham said. "They plan to drive us out of the Mideast by attacking us here at home."

President Obama said Friday that while the U.S. will not send combat troops back to Iraq, he has asked his national security team to "prepare a range of other options." He also added that any U.S. action will have to be accompanied by a "serious and sincere effort by Iraq's leaders to set aside sectarian differences."

In a separate interview on "Face the Nation," former Obama National Security Adviser Tom Donilon cautioned that airstrikes are "not a panacea."

"You need to have targets, you need to have a military plan, and it needs to be coordinated with the rest of your efforts. Most importantly, though, any direct military action by the United States needs to be done when we see that the Iraqi government has actually pulled itself together politically," he said.

Donilon said he would recommend the U.S. support the Iraqi government's counterterrorism efforts and provide intelligence, materiel, advice and planners to restore the Iraqi ground forces.

Like Mr. Obama, he stressed that any action should be contingent upon Iraqi leaders taking steps toward a more inclusive government and bringing back some of the competent military leaders who have been pushed out for political reasons.

Graham, too, agreed that American assistance needs to be coordinated with a political solution. He said that there is "no way in my view that [Iraqi Prime Minister Nouri al-Maliki] can pull this off."

Both Graham and Donilon laid much of the blame for the current violence at Maliki's feet, but Donilon was less insistent that he depart immediately.

"It's not clear that he can pull this off at this point, and we'll have to see. They have a government formation underway, and we need to see what the Iraqi people can do," he said.

Graham conceded that the president has "all bad options" when it comes to dealing with Iraq because airstrikes could result in the accidental deaths of civilians but the fall of Baghdad and a collapse of the Iraqi government would be the "worst case scenario."

He also said it was almost inevitable that the U.S. would have to rely on Iran to help hold Baghdad, likening the situation to the American alliance with Joseph Stalin during World War II to defeat Adolf Hilter.

But he warned that the Americans would have to take steps to ensure that Iranian intervention didn't result in them trying to create a sectarian government in Baghdad with a puppet Shia Muslim leader.

"We also need to put them on notice: Don't use this crisis to create a satellite state of Iraq controlled by Iran," Graham said.

Full transcript of "Face the Nation" on Aug. 7, 2022
Rebecca Kaplan