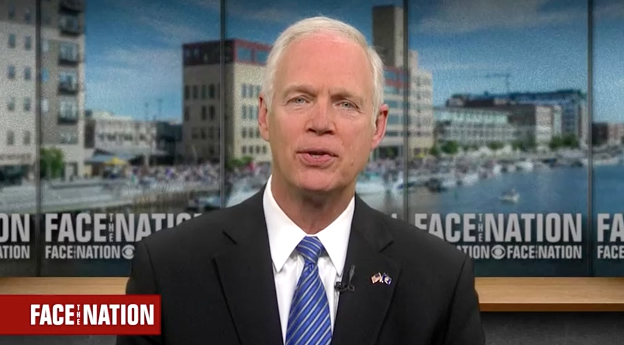 Republican Sen. Ron Johnson of Wisconsin says that the Trump administration's $12 billion bailout for American farmers hurt by tariffs would be a "mess" to implement, saying it's his responsibility to convey to constituents "the harm" caused by ongoing trade disputes. But Johnson said he's "encouraged" by the president's latest round of talks with the European Union, which he said shows Mr. Trump is "moving forward."

"President Trump is trying to shock the world trading system because ever since World War II America has been very generous. Our trading partners have taken advantage of our generosity," Johnson said on Sunday. He said he welcomed a commitment by the U.S. and EU to halt imposing new tariffs while negotiating a new trade deal.

"In terms of a truce on the trade war, let's start negotiating that deal. That I would, you know, certainly provide a united front against China, which is the main problem when it comes to trade," he added.

Johnson's criticism of the president's trade policy was much softer in tone than it was earlier in the week. In a letter to the White House, Johnson wrote that permanent damage had already been done and a $12 billion aid package to farmers was reminiscent of a "Soviet-era economy."

Pressed on Sunday whether he supports the president's bailout package for farmers, Johnson replied: "No, no, no, no.  Hopefully it never gets implemented."

He added, "Where I'm supporting is President Trump's goal of free trade, fair trade and reciprocal trade. And we haven't had it. He's trying to shock the system. I take the signal that he called a truce, that, you know, he at least understands there's harm being done, so he's trying to pull some way to mitigate that harm."

Many Republicans were critical to the president's aid package, which would provide direct payments to farmers who have been hurt by escalating trade tensions. It also includes a food purchase program and a partnership with the private sector to create new export markets for American farmers. The administration said the $12 billion size of the package was in line with the estimated $11 billion hit to farmers from recent trade tensions.

Mr. Trump's economic chief Larry Kudlow told "CBS This Morning" last week that the package would not end up getting "near to $12 billion," claiming that "sums are going to be much lower."

"We're just trying to protect American agriculture from some of the unfair trading practices," said Kudlow, calling the move a "backstop for our patriotic farmers who have been hurt" by trade disputes.

In a 1957 interview, Harvard Professor Dr. Henry Kissinger discusses the challenges facing the U.S. and the strategies laid out in his book “Nuclear Weapons and Foreign Policy,” including the concept of a “limited war”