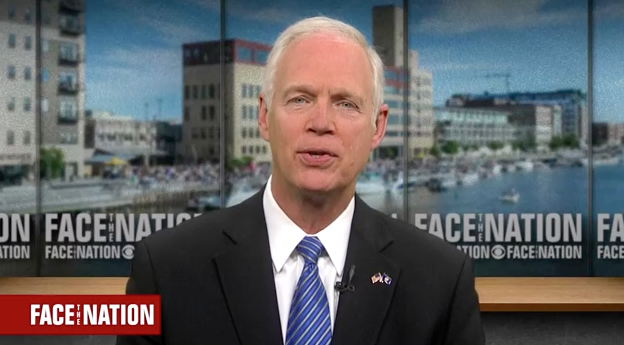 The following is a transcript of the interview with Sen. Ron Johnson that aired Sunday, July 29, 2018, on "Face the Nation."

MARGARET BRENNAN: Welcome back to FACE THE NATION. And Wisconsin Republican Senator Ron Johnson joins us this morning from Green Bay. Welcome to the show. Senator, the president-

MARGARET BRENNAN: - tweeted this morning that he may shut down the government if he doesn't get border wall funding. You're the chair of the Homeland Security Committee. Should we expect a September shutdown?

SEN  JOHNSON: Let's hope not. I think hopefully most of the appropriation bills will actually be passed a little more-a little better prioritization of spending. So I certainly don't like playing shut down politics.

MARGARET BRENNAN: And how damaging would that be for Republicans ahead of the November race?

SEN JOHNSON: I don't think it'd be helpful, so let's try and avoid it.

MARGARET BRENNAN: All right. Well you sound more optimistic than the president does this morning. Let me ask you about the positive GDP number we saw on Friday. You heard Larry Kudlow the president's economic director saying this is really a reason to give your support to the president here that the pain that American farmers are experiencing ultimately will be worth it. Do you believe that when it comes to Wisconsin's farmers?

SEN. JOHNSON: First of all, I'm- I'm far more optimistic as of some of those numbers than I was- at the beginning of the week. -It's really, you know, excellent news. In the last two years of the Obama administration, business investment only grew at a average of 0.6 percent. The last six quarters, we've grown an average of 7.3 percent, and that's just business investment that lays the foundation for future economic growth. So I think it's incredibly good numbers and very strong economy. And my concern about the- the trade wars and the tariffs is it puts all that potentially at risk. But again, I was also very encouraged the fact that the president called a truce with the European president- or European commissioner president. -In terms of a truce on the trade war, let's start negotiating that deal. That I would, you know, certainly provide a- a united front against China, which is the main problem when it comes to trade.

MARGARET BRENNAN: Well that's a-it's an agreement to reach a deal rather than deal itself. But, Senator it sounds like you're-

SEN. JOHNSON: But, at least it's a-it's a truce. And, I've been in the White House a number-

MARGARET BRENNAN: Sure. But, you're really softening the criticism that you voiced earlier this week. I mean you sent a White House-a  letter to the White House saying there's already permanent damage to the U.S. from the trade war. You said it's becoming more and more like a Soviet-era economy.

SEN. JOHNSON: Well certainly the- the 12 billion dollar aid program, it's- it's a Depression era program which certainly proves that Ronald Reagan's maxim that the only- the closest thing to eternal life here on earth is a government program. -That's not going to work in any government's hands. So, you know, my- my hope is that by calling a truce, by moving forward to completing these deals, we never even have to try and implement that 12 billion dollar program because that would be a mess. And yeah- my responsibility is to stay in touch with my constituents and then convey the harm being done by this- by these trade wars, by these tariffs, and the 12 billion dollar package does show the president's listening. So the- President Trump is trying to shock the world trading system because ever since World War II America has been very generous. Our trading partners have taken advantage of our generosity. Other presidents have—

MARGARET BRENNAN: So you support the 12 billion dollars in aid--

MARGARET BRENNAN: --or you don't?

SEN. JOHNSON: No, no, no, no.  Hopefully it never gets implemented. Where I'm supporting is President Trump's goal of free trade, fair trade, and reciprocal trade. And we haven't had it. He's trying to shock the system. I take the signal that he called a truce, that you know he least understands there's harm being done so he's trying topull some way to mitigate that harm. The best way to mitigate the harm is conclude the trade deal with Europe, with Mexico, with Canada, conclude NAFTA.  Then as a united trading world we can go to China and demand that they stop stealing our industrial secrets, our military secrets—

SEN. JOHNSON: --that they start abiding by the World Trading Group rules because China represents more than 60 percent of our trade deficit. They are the primary problem. And I just don't agree the fact that- if we're at war with everybody that we're going to adequately be able to address the main problem which is China.

MARGARET BRENNAN: Well let's talk about the problem in Russia. I know you were in Moscow recently. You came back and you said you think that the reaction to Russian interference was overblown and you called for a softening of sanctions. Do you still believe that?

SEN. JOHNSON: I- I- no- what I called to re-evaluate which sanctions actually work. We are not seeing a change--

SEN. JOHNSON --in behavior of Russia and that's the whole purpose. Well I want them directed. I think, personally- again I'm chair of the European Subcommittee. We've held hearings. I know how maligned Russia's behavior is. I personally believe the sanctions targeted individuals, the oligarchs, the-the kleptocrats that would be far more effective than the types of sanctions, for example, that reduce American businesses' influence in Russia. That's a very positive influence. So I was saying, let's target the sanctions so they actually achieve the purpose, which is change their behavior get them to pull out of eastern Ukraine. Right now that's not happening. But no, I- Listen, China is- I mean Russia is a unfriendly adversary. I would much rather through passive engagement, trying to get them to change behavior, have them start moving toward no worse than a friendly rival that have them slip into the category of the enemy. So I completely agree that we should talk to Russia but I completely agree that we need to approach Russia with real strength and resolve and that's tightening sanctions. But the ones that actually work.