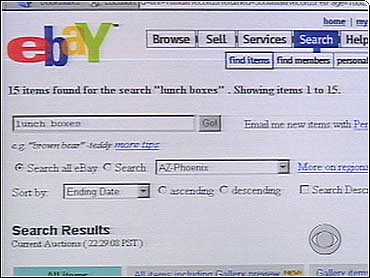 Everyone is guilty of "re-gifting" after holidays past. CBS Correspondent Jerry Bowen reports there's a new way of getting rid of unwanted presents -- and maybe even turning a profit.

Waiting in a long line at a retail store, taking advantage of a store's return policy.

This is the way we used to return the unwanted (or downright ugly) Christmas gift, like the sculpted metal bird that art collector Steve Conti found under his tree this year. "It looks like something that could have been made in high school. Potentially metal shop," he says of the gift.

So Conti did what lots of people are doing these days: Going to an Internet auction site to get rid of it, and making it sound like a whole new bird in the process.

"I said it was 'unusual, hand made, one-of-a-kind.' One-of-a-kind gets you out of a lot of tough jams," said Conti.

That's what Kim Vermaak did too, with the Christmas-gift sweater her 8-year -old refused to wear. She explained, "If he doesn't like it, he won't wear it, and it'll hang in his closet till the next millennium. So I'm auctioning it!"

In fact so many people are getting rid of their unwanted gifts on the Internet, says analyst Daniel Mackeigan, that auction sites are tripling their gross sales after the holidays. According to Mackeigan, "In the past we've all been guilty of receiving unwanted Christmas gifts and re-using or re-gifting, and now we have the potential to profit from it over the Internet."

But is it right to make a buck on a Christmas present? Some shoppers are appalled.

As shopper Connie Covington exclaimed, "They went out of their way and they put thought into buying you a gift and then you put it on the Internet?!"

But ethicist Randy Cohen sees nothing wrong with selling the unwanted gift. "If you accept the idea that a swap is okay, then I think a sale is okay unless you believe touching money taints you," he said.

In fact, says Kim, the mother of the picky 8-year-old, getting rid of Christmas goodies on the 'Net is fun. "Its like going to the races and seeing if your horse or dog is going to win!" she said.

Or maybe even your one-of-a-kind bird! Its seems nearly everything is up for bid on the Internet these days....whether it's tasteful -- or not.