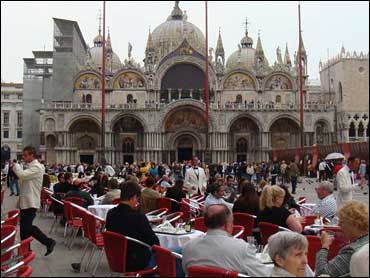 This story was written by CBS News London producer Mimi Spillane for CBSNews.com.

It's part of the Venice scenery during winter months. "Acqua alta," or high water. Water splashes over the quays and bubbles up through the sewers in St. Mark's Square during high tide. It's a progressing problem, as waters levels rise and the seabed recedes.

But, Venice and the Venetians are prepared. Pictures from early October show temporary elevated walkways. It's estimated that 20 million people visit Venice annually. Those who come in the winter months have to be able to get around. There's much to see, starting with St. Mark's Square, where you can see the cafes and pigeons, the Basilica and the bell tower.

The bell tower, called the Campanile in Italian, is leaning three inches. Preservationists are wrapping a titanium belt around the foundation about two yards below ground to keep it from falling over, as the current tower's predecessor did back in 1902. Then, as now, the problem started with a crack. The current one was noticed in 1939 and is seen as a sign that its foundations - thousands of wooden posts driven into unstable ground - are failing to provide adequate support.

A similar problem affects a 500-year-old palace on the Grand Canal, where you can see an opera. It's entertaining, and it lets you experience one of the grand palaces as you move from room to room following the drama. (musicapalazzo.com)

You realize when you're in the building that it's listing a bit toward the canal. There's no danger of sliding out the window, but it's an example of what's happening; Here again, rising water and subsidence are undermining the foundations of Venice's buildings.

Living on the bottom floor of some of the homes is impossible. Bottom floor windows have been cemented over.

Italy has spent billions over the last decades to combat the problem, with mixed results.

But there has been one unexpected benefit to the effort to save Venice. A coral reef is growing at the $7 billion flood barrier under construction and it has become a gathering place for exotic flora and fauna, some of which have ended up there because of global warming.

The waters around Venice are now warm enough to support marine life usually found further south in the Mediterranean and Red Sea. As many as 150 different species have been found, including an endangered shelled creature that can grow to three-feet long.

The project is run by the Venice Water Authority and has the acronym MOSE, a play on the Italian word for Moses (you may remember his relations with water from the Bible). The pictures of jellyfish, crustaceans and rare coral supplied by the project managers are spectacular.

No one is sure of the solution to Venice's sinking problem. The only certain thing is what's there, is worth all the trouble.
By Mimi Spillane

What you need to know about rabies this summer